In an unexpected reversal of (mis)fortune, this morning Sentix writes that the Eurocrisis creeps back into the heads of the investors in a new way: it is no longer Greece, but Italy which is now the country that is most likely to leave the Eurozone within the year from the perspective of the more than 1,000 investors surveyed.

“This development underscores the importance of the referendum to the Constitution in Italy on December, 4th.”

Sentix adds that while it looked as if a “castle peace” had been concluded a few months ago, the euro concerns are gradually rising again among investors. But this time it is not Greece that dominates the agenda. Although for example the pension funds in Hellas are collapsing, the euro exit probability has fallen to 8.48% – the lowest level since 2014.

Italy is now the focus country number 1 in the Eurocrisis! The precarious situation of the Italian banks, the political questions surrounding the Constitutional Treaty at the beginning of December, and the economic turmoil of the past have placed the country south of the Alps at the center of investor interest. 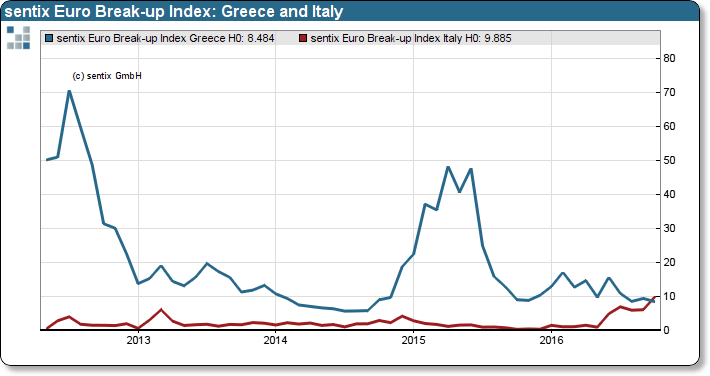 The above graph shows the historical dimension that is inherent in this signal. And it shows that this is not a one-off event, due to an up-to-date message, as we observed in the Netherlands, for example, after the Brexit decision.

Besides Italy, Sentix also measure a disadvantageous trend in Portugal. While the exit probability is not very high here, the EBI value worsens in small but steady steps. Thus, the risk of contagion as measured in the “Contagion Risk Index” also come back to the agenda. 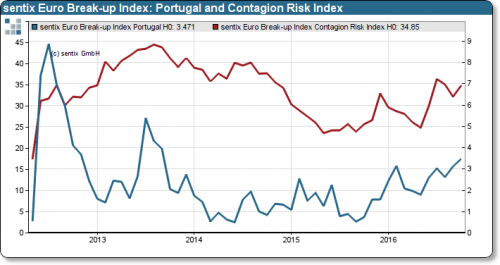 And with the Italian referendum coming up fast, scheduled for December 4, the market is starting to notice.

The formation at the weekend of a minority Spanish government after a 10-month political stalemate has prompted markets to throw the spotlight east to Italy instead for what could be a nervy year-end.

The gap between Italian and Spanish 10-year borrowing costs – viewed as a key indicator of political risk – rose on Monday to 41.4 basis points, its highest since 2012. It hovered close to that level at 39.5 bps in early trade on Tuesday.

Concern about Italy centres on a referendum on Dec. 4 in which voters will decide whether to approve Prime Minister Matteo Renzi’s programme of constitutional reforms to reduce the role of the Senate and the powers of regional governments.

Polls suggest Renzi may lose the referendum, “and that would be very bad news,” said DZ Bank strategist Daniel Lenz. “Since Portugal passed the DBRS ratings test and Spain now has a minority government, Italy is where the risks lie,” he said.

Last month, Portugal came through a DBRS sovereign credit review with its sole investment grade rating intact. Losing that would have made it illegible for the European Central Bank’s bond-buying program.

Meanwhile back in Italy all but one of 26 opinion polls [completely fabricated] published this month have put the “no” camp ahead, with a lead ranging from one to nine percentage points. Renzi earlier this year said he would step down in the event of a “no”. While he has stopped making that promise in recent months, he would come under huge pressure should he lose the vote.

With the outcome of next week’s U.S. presidential election uncertain, [Trump 25 to 1 over Hillary] the direction of the next ECB policy move on Dec. 8 unclear and a U.S. interest rate rise likely on Dec. 14, the timing of the Italian referendum alone could magnify market volatility.

In addition, and adding to the pressure facing Italian banks, Reuters also reported today that Veteran Italian banker and former industry minister Corrado Passera withdrew his rescue plan for the insolvent Banca Monte dei Paschi di Siena on Tuesday, accusing the bank of obstruction and ignoring the interests of its own shareholders.

Monte dei Paschi, which failed the European stress test over the summer, is desperate to complete the 5 billion euro cash call by the end of December, an ambitious target given that Italians are to vote on Dec. 4 in a constitutional referendum which could unseat the government and sour market sentiment.

The attempted turnaround of Monte dei Paschi is the first big test of a state-backed campaign to steady Italy’s banking sector and clean up 360 billion euros in problem loans.

“Ours was a serious proposal to turn around and relaunch the bank that would have given a key role to current shareholders,” Passera said in a letter to the bank which was released to media. “We were denied the minimum conditions for proceeding.”

Passera said in his letter that he had assembled investors willing to invest around 2 billion euros in the bank. He did not name the investors, saying he had been prepared to identify them if Monte dei Paschi signed a confidentiality pact.

But a spokesman for Passera said the bank had asked for so many restrictions to be included in the pact they had not got round to signing it.

Finally, as reported before, and adding to the country’s troubles, another powerful earthquake struck over the weekend in the same central regions that have been rocked by repeated tremors over the past two months. The government recently cited earthquakes and the influx of migrants as reasons for submitting a budget plan to the European Union that would increase Italy’s structural deficit.