The US Navy will pause operations worldwide amid a series of collisions, the most recent between the destroyer John S. McCain and a merchant ship, Chief of Naval Operations Adm. John Richardson said.

“This trend demands more forceful action. As such I’ve directed an operational pause be taken in all of our fleets around the world,” Richardson said.

Earlier on Monday, five sailors were injured after the McCain collided with the Alnic MC near the Malacca straits. Four sailors were taken to local hospitals and the injury of the fifth sailor did not require hospital assistance. 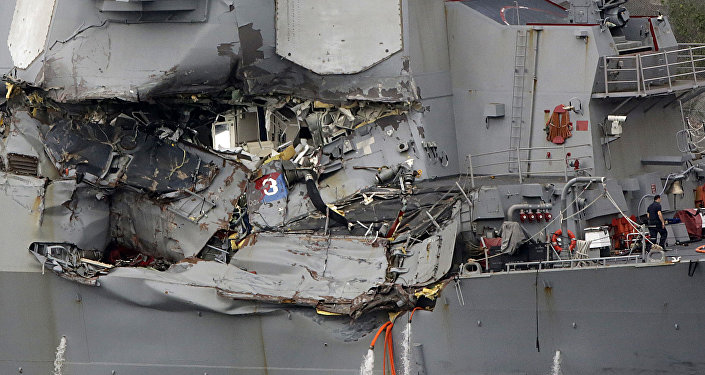 Secretary of Defense James Mattis said that a probe into recent collisions has been ordered.

The defense secretary said there is a separate investigation underway that would determine what happened to US destroyer John S. McCain, which is damaged after colliding with an oil tanker off the coast of Singapore.

The collision is the second by a US ship with a civilian vessel in the Seventh Fleet area of operations this summer.

Richardson said the review will examine the process of training and certifying forces, operational tempo, maintenance trends and other areas to determine the root cause of the incidents.

The probe would also look at how tactical and navigational personnel are trained and verified, Richardson added.

Seven Navy personnel were killed in the Fitzgerald collision, and the ship’s commander was relieved of duty last week.