Why do you suppose Comrade Obama waited until after the midterms to fill a vacancy at the top of the Bureau of Alcohol, Tobacco, Firearms, and Explosives? So he wouldn’t inflict too much damage on his party by nominating an anti-Second Amendment zealot like Andrew Traver:

As special agent in charge of Chicago’s ATF field division, Traver had taken the lead in calling for a ban on semiautomatic firearms.

And Chicago, of course, has been the epicenter of anti-gun government activism. It is not surprising that Traver has also been active in the virulently anti-gun International Association of Chiefs of Police, which has worked to empower Handgun Control-type activists and has commissioned panels to:

• support one-gun-a-month and lock-up-your-safety laws, as well as “ballistic fingerprinting” files on all firearms;
• espouse an “effective” ban on .50-caliber firearms, and a redefinition of “armor-piercing” ammunition that could effectively ban handgun use;
• mandate gun-destruction policies for law enforcement and enhanced funding to go after guns;
• prohibit all private gun sales and make “prohibited persons” out of a much wider variety of persons committing simple misdemeanors;
• back a repeal of the Tiahrt amendment; and,
• allow federal health and safety oversight of the firearms industry (through agencies such as the Centers for Disease Control, the Consumer Product Safety Commission and the Food and Drug Administration).

We hold our most fundamental liberties dear enough that our rulers don’t dare snatch them away all at once. Instead, they gradually eat away at them like termites. The Manchurian Moonbat may have the perfect man for the job. 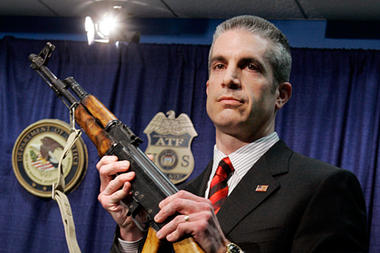 Open Letter To One Who Embraces Victim Disarmament: Diane Sawyer – Police Do Not OWE A Duty To Protect!

Our Judeo-Christian Nation: Forbes – EVIL DID NOT REASON – ONLY WITH GUNS WAS THE UNITED STATES FOUNDED!

U.S. Military Intelligence Unit, Refused To Participate In Any Gun Confiscation While Deployed To Assist During Hurricane Katrina In 2005.

← United States Constitutional Militias.
Obama And The British Monarchy: Their Games Are Over And Paybacks Reside Just Over The Horizon. →