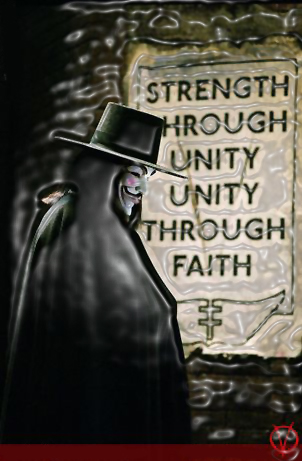 THE WHITE OBAMA WAS FIRED BY THE PEOPLE! 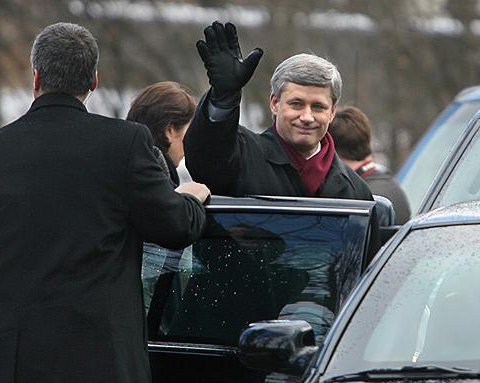 Below Is / Was Their Story!

THE TEN MEMBER BANKS OF THE FEDERAL RESERVE

All owned by the Rothschilds

Rothschild Bank of LondonWarburg Bank of HamburgRothschild Bank of BerlinLehman Brothers of New YorkLazard Brothers of ParisKuhn LoebBank of New YorkIsrael Moses Seif Banks of ItalyGoldman, Sachs of New YorkWarburg Bank of AmsterdamChase Manhattan Bank of New YorkNow ask a question – Where is the Federal Government of the United States listed and how much does it get? I will answer it for you, it is not listed because the Federal Reserve is private and The United States receives nothing. 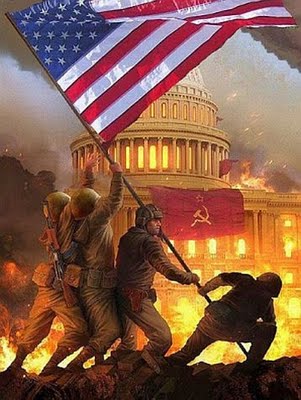 The privately owned Federal Reserve bankers, are already prepared for a hostile merger of Canada with the United States with the aid of ROTHSCHILD PUPPET Stephen Harper. 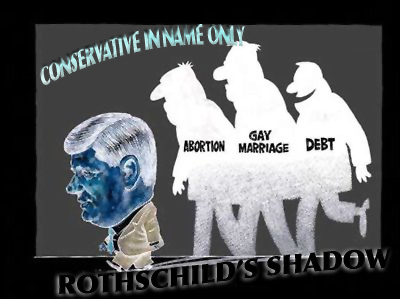 The same bankers who orchestrated the United States Wall Street swindle ($12.5 trillion bailout the Federal Reserve bankers swindled from the American taxpayers through fraudulent credit mortgage derivatives- as of December 1, 2010) are banking on Stephen Harper winning a majority on May 2, 2011. They are laying in wait until Harper wins a majority and dissolves Canada, the Canadian flag and the Canadian Dollar. 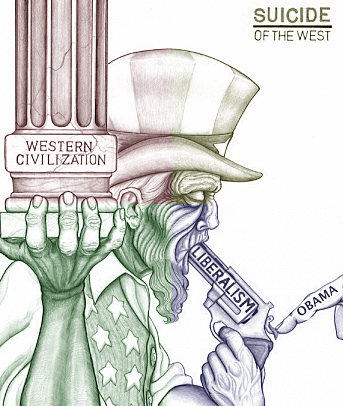 America Allows Obama To Print $Trillions To Cover The Housing Bubble Fraud Derivatives. It Will Take 30 years of work to cover the fraudulent indebtedness benefitting only Rothschild International Banking Cartel. Our communist representatives cut back our life style which we fought and died for instead of nullifying this fraudulent debt with The Glass Steagall Act. 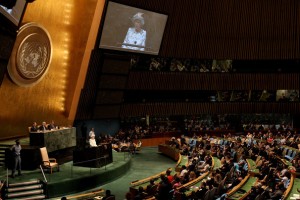 In their arrogance, convinced that by 2012 Europe will have become that socialist-like superstate and the global NWO (European Union/North American Union (SPP)(EU/NAU) will be a fact, they will celebrate the London 2012 Olympics with the historical Venus rising and transit on Solar Maximum 2012 with a Nazi-Germany style Olympic Games (Berlin -1936) in order to demonstrate the power and reality of this Resurrected Old World Order aka; (New World Order) and their supporters to the entire world. 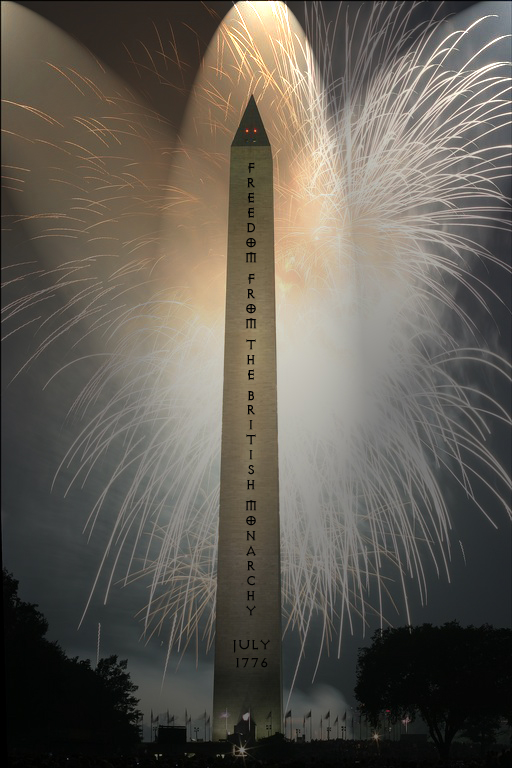 WE CAN LEARN ALOT FROM CANADA BY BOOTING THESE CORRUPT LEGISLATORS OUT! 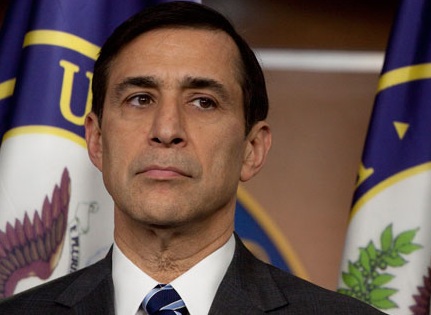 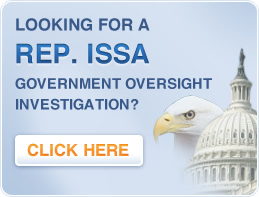 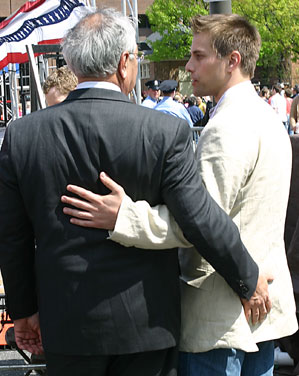 BARNEY FRANK WITH THE EXECUTIVE OF FANNIE MAE ~ HERB MOSES! ARE WE THAT SPINELESS NOT TO BRING BARNEY FRANK TO JUSTICE? BARNEY FRANK IS THE  CHAIRMAN OF THE FINANCE COMMITTEE AND HE INTIMATES WITH THE FANNIE MAE EXECUTIVE HERB MOSES ~ IS THIS NOT JUDICIAL CONFLICT? SHORTLY THEREAFTER AMERICA GETS THE FABRICATED HOUSING BUBBLE! SURE ALL IS WELL IN LALA LAND!

The Federal Reserve Bankers orchestrated the largest swindle in the history of the United States, and the World, by fraudulently declaring loses of $billions. These bankers fraudulently declared that their banks would fail unless the US government paid them $trillions in bailout money. 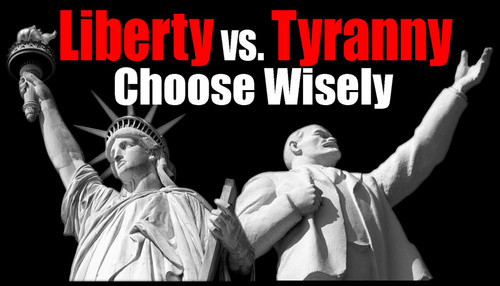 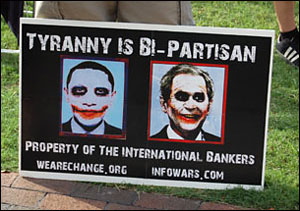 Both George W Bush and Barack Obama were willing conspirators in the massive swindle of over $12.5 trillion from the American taxpayers. Because Bush and Obama handed over $trillions to the federal Reserve bankers! The United States NOW has no money to finance its social programs, its health care system, the American peoples’ pensions, its military, its government and all of its financial obligations. We handed Our selves NOW to be subjugated by London’s Rothschild.

The Japan earthquake and tsunami added to the US economic woes as the second largest holder of US debt can no longer support the US economy. Japan is itself faced with the massive financial burden of rebuilding and can no longer afford to buy the US debt. Where Was Rothschild When Japan’s Needed Humanitarian Aid? China can clearly see that the U.S. financial system is effectively insolvent and is now starting to dump the worthless Rothschild federal Reserve Note. 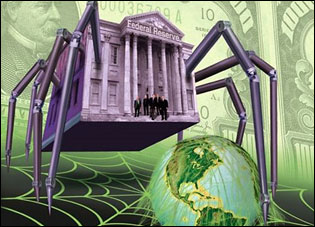 The Federal Reserve bankers have been working for years to destroy the United States as we know it. Their goal is to bankrupt the United States. By bankrupting the US the US government will be forced to dissolve the United States Constitution and the Bill of Rights in favor of a North American Union with Canada and Mexico. 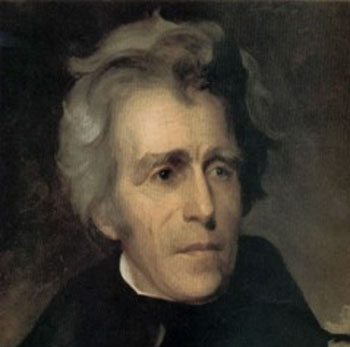 1837: Following his years of fighting against the Rothschilds and their central bank in America, President Andrew Jackson finally succeeds in throwing the Rothschilds central bank out of America. It would not be until 1913 that the Rothschilds would be able to set up their third central bank in America, the Federal Reserve. Thus the need for the Glass Steagall Act by FDR, which protected Americans from Rothschild exploitation by investment banking. Bill Clinton subsequently repealed The Glass Steagall Act in 1999, which allowed Rothschild to foment a housing bubble, using fraudulent derivative backed mortgages. This then led to the pretext for too big to fail by Rothschild cronies, which subjugates Americans, to pay off $Trillions worth of printed money. Re-Introduction of the Glass Steagall Act, would retroactively make Rothschild responsible for his own housing bubble debt, and retroactively lower the debt ceiling into normal levels. 1845: Andrew Jackson (The 7th President of the United States) dies. This Great Patriot leaves instructions in his will to have, “I Killed The Bank,” inscribed on his headstone, a reference to the fact he banished the Rothschilds second Central bank in the United States from the US in 1837.

A Stephen Harper majority is key to forming the Federal Reserve bankers’ North American Union. The Federal Reserve bankers’ plans for a takeover of Canada in 2009 were defeated in 2008 when Stephen Harper won only a minority government. In 2008 the Feds were so sure that Harper would win a majority that they printed $billions in North American Union Notes dated 2009.

The Federal Reserve’s North American Union Note (sample image below) has already been printed to replace the US Federal Reserve Note, the Canadian Dollar and the Mexican Pesco. 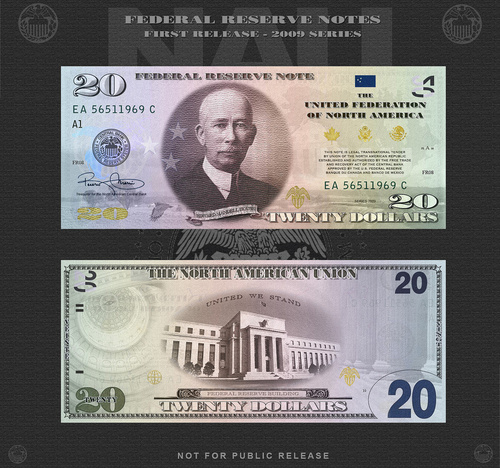 The Note Reads – “Federal Reserve Note.” It has a Federal Reserve bankers adopted NAU flag (blue with 3 white stars that represent Mexico, the US and Canada) above the words “The United Federation of North America”. Below it the Federal Reserve bankers boldly claims “THIS NOTE IS LEGAL TRANSNATIONAL TENDER BY UNION OF THE NORTH AMERICAN REPUBLIC ESTABLISHED AND AUTHORIZED BY THE FREE TRADE AND RECOVERY ACT OF THE CENTRAL BANK APPROVED BY THE U.S. FEDERAL RESERVE BANQUE DU CANADA AND BANCO DE MEXICO” .

The note is a complete fraud. In the United States – The Congress shall have Power To lay and collect Taxes, Duties, … coin Money, regulate the Value thereof. The Federal Reserve bankers’ NAU Note unlawfully eliminates the US Congress power to coin the US money. It is a fraud because it eliminates the vote of the US citizens, the Canadian citizens and Mexican citizens. Its claim of legal tender is based entirely on the Federal Reserve created free trade agreement.