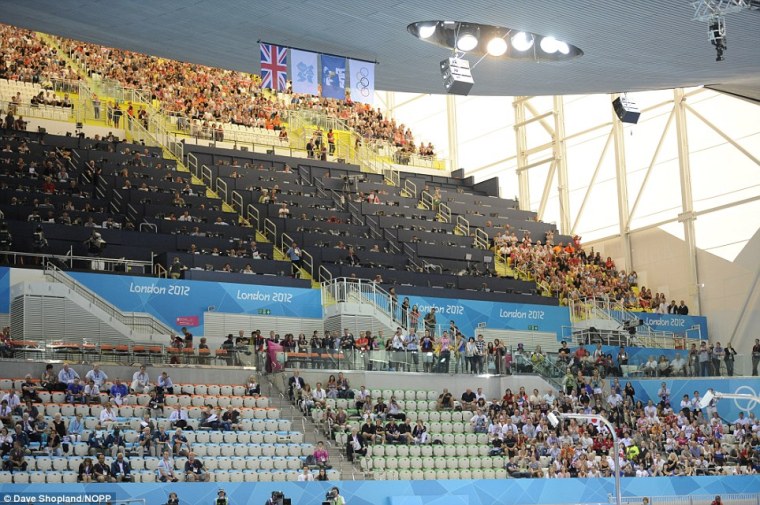 London 2012 organisers promised an investigation after thousands of empty seats were visible yesterday at some of the most popular Olympic venues.

Rows of vacant spots were seen at swimming heats, volleyball, gymnastics and dressage events on the opening day of the Games, with “no shows” by Olympic officials, athletes and members of the media blamed.

Where are all these apparently ‘sold out’ tickets going to? Sponsors? It’s a sad joke. 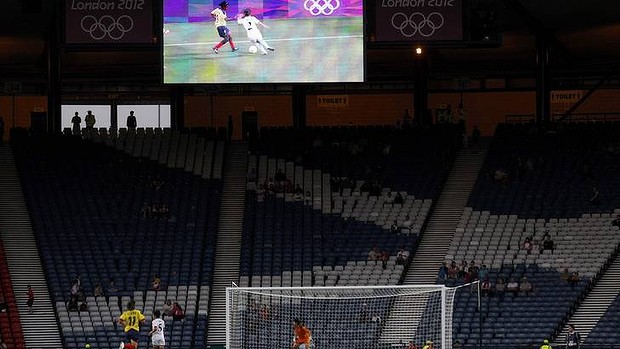 Empty seats are seen in the stands during the women’s football. Photo: Reuters

BLAMING TICKET “MISDIRECTION” INSTEAD OF FEAR!

Lord Coe, the chairman of Locog, had pledged to address the issue, which had plagued the Beijing Olympics, by having “flexible” accredited seating zones. This was meant to allow for smaller accredited areas for heats, taking place in the morning, which would then be expanded for evening sessions when the demand for finals tickets was highest.

Organisers appear to have abandoned that plan, citing the logistical and security problems involved in repeatedly changing the layout of venues. “We have reduced the size of the accredited areas compared with previous Games but it is too difficult to make the size of that area flexible,” a spokesman said.

Organisers also believed some officials and sponsors slept in late yesterday to recover from Friday’s opening ceremony, which finished well after midnight.

They are investigating which bodies ( Why Not “People” ) did not use the seats and issuing warnings that tickets would be redistributed if the problem persists.

“We believe the empty seats are in accredited seating areas, and we are in the process of finding out who should have been in the seats and why they weren’t there,” the spokesman said.

One fan, Diana Hill, contacted the BBC, which is Britain’s Olympic broadcaster, to complain about the empty seats.

She said: “To sit down and watch the first day and see the dressage event half full, huge chunks of seating empty in men’s gymnastics and badminton (and I’m sure many more events), is incredibly frustrating.

“Where are all these apparently ‘sold out’ tickets going to? Sponsors? It’s a sad joke.”

There were thousands of empty seats at football matches but organisers were expecting this because large venues failed to sell out.

Originally, about 6.6 million of the 8.8 million tickets were made available to members of the public. However, many of those who applied failed to get tickets for any events at all, while others were only successful with a fraction of their total orders.

The balloting system ended with some of the most expensive tickets still available and about 500,000 football tickets removed from sale.

The International Olympic Committee (IOC) has ruled that a certain number of seats must be reserved for members of the “Olympic family”, whose numbers include athletes, team officials, members of federations and others.

In most venues, at least a fifth of the seats are reserved for “family” members and sponsors, while this can rise to almost half the tickets for highly prized sessions such as athletics finals and the opening ceremony.

Officials have discussed operating a “recycling” scheme, similar to a policy used at Wimbledon for the tennis championships, which would see unused tickets resold at a much cheaper price to spectators who were already at the Olympic Park. They have also said they will make it very clear to sponsors that they must only take tickets they are certain will be used.

The All Seeing Eye: This occult symbol is on the outside left hand of the Israel Supreme Court building. Its symbolism is taken from the book of Genesis wherein the serpent promised Adam and Eve that their ‘eyes would be opened’ if they ate of the tree of ‘knowledge’ of good and evil. The Hebrew word for ‘eyes’ in this passage is in the singular. The pyramid upon which the eye is inserted represents the Rothschilds’ hierarchical command of world-wide rule.

But yesterday it was unclear whether such a scheme would be introduced.

Most venues last night reported a vibrant atmosphere as fans turned out in hundreds of thousands for the opening day of the Games.