The Pacific “Ring of Fire” is where the continental plates collide, causing frequent seismic earthquake, and volcanic activity.

View Of Tectonic Plate Slipping Under The USA West Coast

Similar To The Plates That Form The Human Skull.

San Andreas and Cascadia are on the fourth ‘corner’ of the Ring of Fire ‘square’, which has already seen three earthquakes in 2010 and 2011

Waiting for The Big One: San Francisco and Los Angeles sit on California‘s San Andreas fault, the tectonic boundary between the Pacific and North American plates. The 7.9 magnitude 1906 quake killed more than 3000 people in San Francisco. A 9.2 earthquake and resulting tsunami in Alaska in 1964 killed 143. Central America is one of the most seismologically active regions on Earth. Source: Supplied

The Next Video Is Meticulous In Charting Nuclear Test Explosions. The Reason I Am Posting This Video Is To Show How Many Times Nuclear Test Explosions Are Carried Out Next To The Ring Of Fire ” San Andrea’s Fault Line” In California! No Big Deal? Or Does This Show Reckless Disregard For The Fragile Tectonic Plate “Divergent Ocean Floor Boundary”. So if it was firecrackers no big deal, but nuclear war heads set off underground?

Beginning with the Manhattan Project‘s “Trinity” test near Los Alamos and concluding with Pakistan‘s nuclear tests in May of 1998, this video shows the nuclear explosions which have taken place between 1945 and 1998. Each nation gets a blip and a flashing dot on the map whenever they detonate a nuclear weapon, with a running tally kept on the top and bottom bars of the screen. The Dates elapse on the upper right of the screen _ the extensive action begins around 1961 ~ simply move the time bar ahead to fast forward. The months click by in the upper right of the screen as the video progresses ~ you will not see this video on “Sex & The City” as it is pure scientific data that tests your patience, but on 1961 you can see the beginning barrage of nuclear explosions all along the California fault line area. This can be located at 2:11 minutes on the time bar slider.

Map of US nuclear facilities highly vulnerable to “unpredicted” earthquakes and tsunamis.

1)  Truth at any cost lowers all other costs

2)  Vested interests cannot be trusted to tell the truth

HAARP can produce an Earthquake cause and effect.

A region of seismic volatility runs along the Pacific rim called the Ring of Fire. It marks the boundary between a number of huge tectonic plates in the earth’s crust. The pressure which builds up when one plate pushes against the other can lead to violent volcanic activity and powerful earthquakes like the recent ones in Japan, New Zealand and Chile.

The Ring Of Fire Is Roaring To Life

On Wednesday, the most powerful strike-slip earthquake ever recorded happened along the Ring of Fire.  If that earthquake had happened in a major U.S. city along the west coast, the city would have been entirely destroyed.  Scientists tell us that there is nearly a 100% certainty that the “Big One” will hit California at some point.  In recent years we have seen Japan, Chile, Indonesia and New Zealand all get hit by historic earthquakes.  It is inevitable that there will be earthquakes of historic importance on the west coast of the United States as well.  So far we have been very fortunate, but that good fortune will not last indefinitely.

In a previous article, I showed that earthquakes are becoming more frequent around the globe.  In 2001, there were 137 earthquakes of magnitude 6.0 or greater and in 2011 there were 205.  The charts and data that I presented in that previous article show a clear upward trend in large global earthquakes over the past decade, and that is why what happened this week is so alarming. 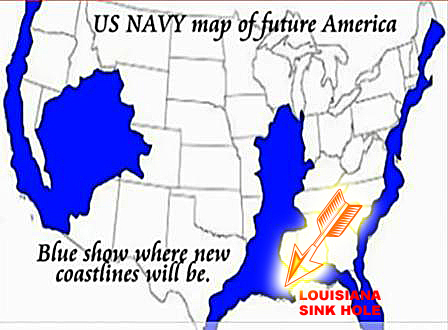 Normally we only see about one earthquake of magnitude 8.0 or greater per year.  The magnitude 8.6 earthquake was the most powerful strike-slip earthquake in recorded history.  If that earthquake had happened in the United States, it would have probably been the worst natural disaster in U.S. history.  The following is from an article posted on The Extinction Protocol….

I’ve never heard of a strike-slip lateral earthquake of this great a magnitude; especially under water. Preliminary assessment of the Indonesian quakes by U.S. geologists suggests one plate lurched past each other as much as 70 feet. San Andreas is a strike-slip, lateral- can we even imagine two sections of ground moving 70 feet near San Francisco? Had the force of the Sumatra quakes been unleashed upon San Andreas, the city would have been completely destroyed.

And earthquake activity along the west coast has definitely been heating up in recent days.

On Wednesday, a magnitude 5.9 earthquake struck approximately 160 miles off of the coast of Oregon.

Early on Thursday, there were two major earthquakes (magnitude 6.9 and magnitude 6.2) in the Gulf of California.

It is only a matter of time before the “Big One” hits California.

Sadly, most Americans (especially young Americans) can’t even tell you what the Ring of Fire is.  The following is how Wikipedia defines the “Ring of Fire”….

The Pacific Ring of Fire (or sometimes just the Ring of Fire) is an area where large numbers of earthquakes and volcanic eruptions occur in the basin of the Pacific Ocean. In a 40,000 km (25,000 mi) horseshoe shape, it is associated with a nearly continuous series of oceanic trenches, volcanic arcs, and volcanic belts and/or plate movements.

The entire west coast of the United States falls along the Ring of Fire and a massive network of faults runs underneath California, Oregon and Washington.

At this point, scientists tell us that the west coast is long overdue for a major earthquake.  An article in Time Magazine a few years ago stated the following….

California has more than 300 faults running beneath its surface, including the massive San Andreas Fault, yet the quake to end all quakes has yet to occur. In 1980, a federal report declared the likelihood of a major earthquake striking California within the next 30 years to be “well in excess of 50%.”

Unfortunately, the truth is that is a very, very conservative estimate.  The west coast has always been extremely unstable and it always will be.  At some point there is going to be a tragedy of unimaginable proportions on the west coast.

Just hope that you are not there when it happens.

But it isn’t just California, Oregon and Washington that should be concerned.

According to the Arizona Geological Survey, there were 131 earthquakes in the state of Arizona in 2011.  That was a huge increase from just 53 in 2010.

And of course an absolutely nightmarish earthquake could occur along the New Madrid fault at any time, but that is a topic for another article.

As far as the Ring of Fire is concerned, another major threat is volcanic activity.

One of these days, one or more of the major volcanoes on the west coast is going to experience a major eruption again.  There have been signs that Mt. Rainier has been becoming more active, and a major eruption of Mt. Rainier could potentially be absolutely devastating for much of the northwest United States.

Of even greater concern along the Ring of Fire is Mt. Fuji.  As I wrote about the other day, Mt. Fuji has been dormant for about 300 years but is now rapidly roaring to life.  New craters have appeared and these new craters are venting gas.  There has been a swarm of earthquakes under Mt. Fuji this year, including a magnitude 6.4 earthquake on March 15th.

*The volcanoes in Iceland that caused such huge problems a few years ago are becoming very active once again.

*Authorities in Colombia have declared a “red alert” and believe that an eruption of the Nevado del Ruiz volcano is imminent.

*Ash is venting at the world famous Anak Krakatau volcano in Indonesia.

Something really strange is going on.

Most scientists will deny it or will attempt to downplay it until they are blue in the face, but the truth is that the trembling of our planet is getting worse.

If this shaking continues to get worse, there are going to be some absolutely horrific tragedies in the years ahead.

← Governor Moonbeam Of California: Pay Up On NWO’s Warming Market Propaganda Or Find Another Planet!
The Atlantic Releases Its List Of Slave Thinkers For 2012 →