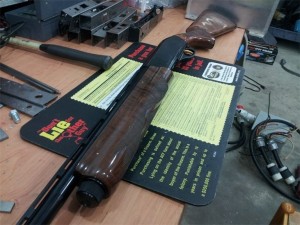 A Tucson, Arizona affiliate of the Armed Citizen Project will spend $12,000 on a new charitable initiative: handing out free shotguns in neighborhoods with high crime rates. According to the head of the Tucson initiative, an armed citizenry is the sensible solution to an underfunded police department facing budget cuts. The Arizona Daily Star writes:

“We need to take back our city, and it needs to come back to the citizens and not the criminals,” [Shaun] McClusky said. “Right now, the criminal element is winning.”

Over the next couple of weeks, McClusky and others will begin spreading leaflets and posting fliers in Midvale Park, Pueblo Gardens and a yet-to-be-determined midtown neighborhood to induce residents to sign up for the program.

McClusky, a failed mayoral candidate, likened gun violence to “saying spoons are responsible for making people fat,” even though armed citizens rarely stop violent crime, and their intervention can cause danger and bloodshed.

Tucson Councilman Steve Kozachik called the project “absolute lunacy.” “These people have lost their minds,” he said (sadly, they are far from the only ones).

Tucson is the site of an assassination attempt against former Rep. Gabby Giffords (D-AZ) two years ago. Thirteen people were injured and six others were killed in the shooting.