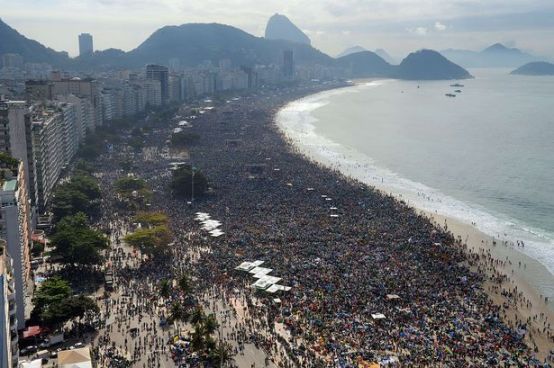 CAGLIARI, Sardinia (Reuters) – Pope Francis made one of his strongest attacks on the global economic system on Sunday, saying it could no longer be based on a “god called money” and urged the unemployed to fight for work.

Francis, at the start of a day-long trip to the Sardinian capital, Cagliari, put aside his prepared text at a meeting with unemployed workers, including miners in hard hats who told him of their situation, and improvised for nearly 20 minutes.

“I find suffering here … It weakens you and robs you of hope,” he said. “Excuse me if I use strong words, but where there is no work there is no dignity.”

He discarded his prepared speech after listening to Francesco Mattana, a 45-year-old married father of three who lost his job with an alternative energy company four years ago.

Mattana, his voice trembling, told the pope that unemployment “oppresses you and wears you out to the depths of your soul”.

The crowd of about 20,000 people in a square near the city port chanted what Francis called a prayer for “work, work, work”. They cheered each time he spoke of the rights of workers and the personal devastation caused by joblessness.

The pope, who later celebrated Mass for some 300,000 people outside the city’s cathedral, told them: “We don’t want this globalised economic system which does us so much harm. Men and women have to be at the centre (of an economic system) as God wants, not money.”

“The world has become an idolator of this god called money,” he said.

Sardinia‘s coast is famous for its idyllic beaches, exclusive resorts and seaside palatial residences of some of the world’s richest people, including former Italian prime minister Silvio Berlusconi and a host of Hollywood actors.

But much of the island, particularly its large cities and the vast agricultural and industrial interior, has been blighted by the economic crisis, with factories closed and mines operating at low capacity. 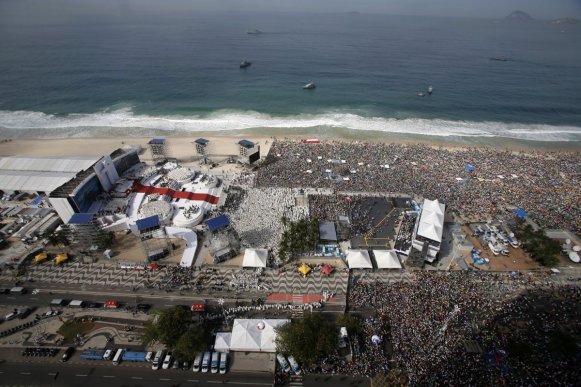 Cagliari has a youth unemployment rate of about 51 percent. The Sulcis area in the southwest of the island is threatened with more unemployment from the looming closures of the Carbosulcis coal mine and an aluminum smelter.

The pope made clear that his assessment was not limited to the local situation.

While Francis’s predecessor Benedict also called for changes to economic systems, he was more likely to use dense intellectual language.

Francis, who as bishop of Buenos Aires sided with unemployed workers in their conflict with government austerity plans, ended his improvised speech with a prayer asking God to “give us work and teach us to fight for work”.

Francis said he did not want the crowd to see him as a smiling “cordial manager of the Church who comes here and says to you ‘have courage'”.

He added: “I don’t want this. I want this courage to come from inside me and push me to do everything I can as a pastor and a man.”

Francis brought tears to the eyes of some in the crowd when he told his own family’s story of emigration fromItaly to Argentina and how they lost everything in the Great Depression.

“I was not born yet, but as a child I remember hearing talk of this suffering,” he said.

Francis said globalization had brought with it a culture where the weakest in society suffered the most and often, those on the fringes “fall away”, including the elderly, who he said were victims of a “hidden euthanasia” caused by neglect of those no longer considered productive.