Obamacare Should Remind Us We Are Not ‘Subjects,’ We Are People

The unveiling of the dictatorial debacle that is Obamacare absolutely flabbergasts me. It is stunning on so many levels, but the most shocking aspect of it for me is watching millions of free Americans stand idly by while this man, his minions in Congress and his cheerleaders in the press systematically dismantle our Constitution, steal our money, and crush our freedoms.

Where is your spine, America?

Yes, I know people are complaining. I read the news on the internet. I read blogs. I have a Twitter feed. So what? People in the Soviet Union complained. People in Cuba complain. People in China complain (quietly). Complaining isn’t the same thing as doing anything about it. In fact, much of the complaining that we hear sounds like resignation:

Oh well, this is the way things are.

Perhaps you need reminding of a few important facts.

The President is not a king. Barack Obama does not behave like a President, an elected official, someone who realizes that he works for us. He behaves like a king, a dictator – someone who believes that his own pronouncements have the force of law, and who thinks he can dispense with the law’s enforcement when he deigns to do so. And those of us who object? How dare we? Racists!

And while he moves steadily “forward” with his plans to “fundamentally transform” the greatest country in human history, he distracts people with cheap, meaningless trivialities, like “free birth control pills”!

Since when did the leader of the free world care so much about how people have sex, who they have it with, and what meds they use when they have it? Does he have nothing more important to concern himself with?)

It isn’t just a failed software program; it is a failed philosophy. People are marveling that Healthcare.gov was such a spectacular failure. Well, if one is only interested in it as a product launch, I’ve explained some of the reasons for that here.

But the larger point is that it isn’t a software failure, or even a product failure; it is a philosophy failure.

I have said this before: Obama is not a centrist; he is a central planner.

The central premise of central planning is that a handful of wunderkinds with your best interests at heart (yeah, right) know better than you what’s good for you. The failure of such a premise and the misery it causes have been clear from the dawn of humanity.

Kings and congressmen, dictators and Dear Leaders, potentates, princes and presidents can all fall prey to the same imperial impulses:

“we know what is good the ‘the people.’

And they are always wrong.

There is a reason that the only times communism has really been tried have been after wars, revolutions, or coups d’état. You have to have complete chaos for people to be willing to accept the garbage that centralized planning produces.

Take the Soviet Union, for example. After two wars, famine, and the collapse of the Romanov dynasty, why wouldn’t people wait in line for hours to buy size 10 shoes? Or settle for the gray matter that passed for meat in the grocery stores?
But communism’s watered-down cousin, socialism, isn’t much better.

Contrary to what so many who believe in a “living Constitution” say, the Founding Fathers absolutely understood this. That is why the Constitution was set up to limit government power.

(Memo to the President: the drafters of the Constitution deliberately didn’t say “what government had to do on your behalf.”)

They understood that that was the path to folly, fear, and famine.)

Obama is deceitful. Just as the collapse of the computer program should not surprise anyone, neither should we be shocked that the President lied about his healthcare plan.

Have any of you been paying attention over the past few years? Obama has made no secret of his motivations or his methods. The philosophies which inspire him espouse deceit and other vicious tactics. (Don’t take my word for it: read Saul Alinsky.) Obama infamously told reporter Richard Wolffe,

“You know, I actually believe my own bullshit.”

He has refused to be forthcoming about his past (where are his academic records?). His own pastor, Rev. Jeremiah Wright, told author Ed Klein, that Obama said to him,

“You know what your problem is? You have to tell the truth.”

Did Obama lie when he said dozens of times,

Of course he did. That’s what he does. 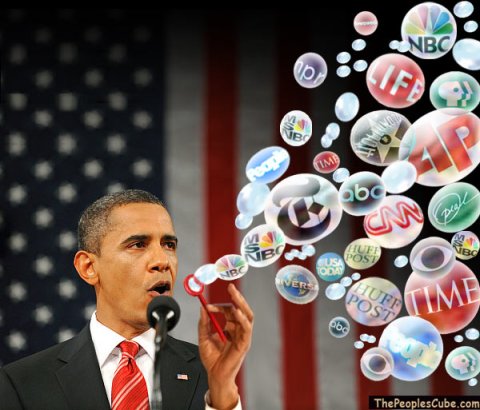 The media is responsible. And had the media been doing their jobs, we would have known a lot of this much, much earlier.
The press is charged with the sacred responsibility of protecting the people from the excesses of government. Our press has been complicit, incompetent, or corrupt.

Had they vetted this man in 2008, as they would have a Republican candidate, we would have known far more about him than we do, even now. Had they pressed for more details about Obamacare, Congress’ feet would have been held to the fire.

Had they done their jobs about Eric Holder, Fast and Furious, Benghazi, the IRS scandal, NSA spying – or any of the other myriad betrayals of the public trust that this administration has committed, Obama would likely have lost his 2012 reelection campaign.

(A fact that even The Washington Post has tacitly acknowledged. Well done, fellas! Happy now?)

Instead, they turned a blind eye, even when they knew he was lying, abusing power, disregarding the limits of the Constitution. It was only when he began to spy on them, and when the lies were so blatant that the lowest of low-information voters could figure it out that they realized they had to report on it.

(Even in the face of blatant, deliberate and repeated lies, The New York Times has the audacity to tell us that the President “misspoke.”) They have betrayed us, abandoned us, and deceived us.

Ted Cruz was right. So was Sarah Palin. The computer program is a disaster. The insurance exchanges are a disaster. What’s left? The healthcare system itself. And this, of necessity, will be a disaster, too.

Millions of people have lost their individual insurance plans. In 2015, millions more will lose their employer-provided coverage (a fact which the Obama administration also knew, and admitted elsewhere).

The exorbitant additional costs that Obamacare has foisted on unsuspecting Americans are all part of a plan of wealth confiscation and redistribution. That is bad enough. But it will not end there. When the numbers of people into the system and the corresponding demand for care vastly exceed the cost projections (and they will, make no mistake), then the rationing will start.

Not only choice at that point, but quality and care itself will go down the tubes. And then will come the decisions made by the Independent Payment Advisory Board about what care will be covered (read “paid for”) and what will not.

In fact, progressives are already greasing the wheels for acceptance of that miserable reality as well. They’re spreading the lie that it will be about the ability of the dying to refuse unwanted or unhelpful care.

Don’t fall for that one, either.

It will be about the deaths that inevitably result from decisions made by people other than the patients, their families, and their physicians.

Perhaps it’s helpful to think of their assurances this way:

We are not SUBJECTS. (or, Nice Try, the Tea Party Isn’t Going Away).

We have tolerated these incursions into our lives and livelihoods too long already. There is no end to the insatiable demand “progressives” have to remake us in their image. Today it is our insurance, our businesses, our doctors, our health care. Tomorrow some new crusade will be announced that enables them to take over other aspects of our formerly free lives.

I will say it again: WE ARE NOT SUBJECTS. Not only is the Tea Party right on the fiscal issues, but it appears that they are more relevant than ever.

We fought a war once to prove we did not want to be the subjects of a king, and the Boston Tea Party was just a taste of the larger conflict to come. If some people missed that lesson in history class, we can give them a refresher.

The 2014 elections are a good place to start. Call your representative, your senator, your candidate and tell them: “We are not subjects. You work for us. And if the word “REPEAL” isn’t front and center in your campaign, we won’t vote for you. Period.”

Laura Hollis is a professor at the University of Notre Dame

Laura Hollis is an attorney and teaches entrepreneurship and business law at the University of Notre Dame.

She resides in Indiana with her husband and two children.