Every day that goes by, we continue to see a continued widespread assault from the prostitutes in the corporate mocking bird mainstream media. The assault is always the same: wave after wave of brainless nonsense, written to dumb down the masses of sheep while spinning the truth and promoting an agenda.

I have often written that I despise the corporate mass media more than the Banksters and the corrupt political thugs who are running / ruining our nation and our society. At no time in our history has the American media evolved into the disgusting propaganda mechanism that it has currently become.

The lack of journalistic integrity, the total absence of basic fact checking, the heavily biased opinions and the blatant lies and misinformation that constantly spew from “unnamed” or ‘anonymous” sources are a total and complete disgrace in every aspect.

Even when you thought these presstitutes could not possibly sink any lower, they engage themselves in the ultimate hypocrisy by criticizing Russian, Chinese, middle eastern and North Korean media outlets as totalitarian propaganda mechanisms all while using references to Hitler and Stalin.

What a total joke considering those people provided the lesson plans and road maps for what the “media” in the United States has evolved into today. I will barely even mention the censorship issue which occurs when anyone tries to be what I like to call a “Truth Troll” and speak out against the constant lies and disinformation.

If anyone disagrees with what I am saying here, please point me to a retraction in the comments section of this article by/from any major network or publication which states their reporting of a story was inaccurate, or information presented in their work was not correct. I would be very interested to see that. I cannot recollect a single instance where I have seen or heard of such an event taking place by any major corporate media outlet.

Once a story is presented or published, it goes down the memory hole of most sheep, and the whores in the corporate media count on that. If no one is able to publically call you out for your poor quality information, because you own all the wires and control the entire media infrastructure, it becomes very easy to be unaccountable for the garbage you produce and spin as “news”.

Every time I think that it possibly can’t get any worse, something new happens and a new low is achieved by the mockingbird presstitutes. Just look at the debacle that the missing Malaysian Flight #370 coverage has turned into.

Talk about a weapon of mass distraction. For almost two weeks now, every time a floating piece of trash is sighted in a possible search area we have a “breaking news” announcement. The media whores have even sunk to new lows by posting images of floating trash to supplement their lame, fact-less, mind-less, grossly speculative content.

This level of stupidity is unprecedented, and it pains me that it is being consumed and digested at the level we see occurring now. Everywhere you turn this story about a missing airliner is dominating the headlines like this is the only important event taking place in the world. Whatever you do, just don’t call it a “Conspiracy” because that’s when people get upset.

We know when we are being lied to when we don’t know what to believe anymore: I am now of the opinion that the function and purpose of the main stream media is not to just simply conceal the truth or promote an agenda.

The mass media manipulation of the minds of the sheep goes a few steps further beyond that. Over the last decade we have seen several major incidents that the mass media has heavily focused on. 9/11, the Boston Bombing, Sandy Hook, and now this missing flight # 370 to name a few. One thing people need to recognize is that all these stories have one thing in common which is:

The mass media has literally bombarded the public at large with so much speculation, so much misinformation, and so much blatantly wrong information that it becomes difficult for the average person to recognize the truth even when it is one possible scenario that is sitting right in front of them.

In my opinion, the mass media propagandists have done their job well when you no longer know what to believe. The mass media saturates people with so much erroneous information that the truth becomes diluted even for the trained ears and eyes of people who are familiar with the game and understand how it is played.

Most people here are familiar with Sandy Hook (I do not want to dwell on this topic, but it’s an easy reference / example that readers will remember, so here goes). The following explanations were presented by various major mainstream media outlets for what connection Adam Lanza had to bring him to Sandy Hook Elementary School:

1.) He was a former student

2.) His mother was a teacher there

3.) His mother was a volunteer at the school

4.) Adam was a volunteer at the school

5.) Adam had some type of altercation with school staff days before the shooting

6.) His selection of the school was completely at random 7.) He chose the school because it was close to his home

All of these “theories” were presented as factual information by the main stream media from various “sources”, they quoted, the majority of which were quoted on “on condition of anonymity” or were simply stated as “local school or town administrators” or “local or federal law enforcement”.

In the end, as everyone now knows, all of these scenarios were bogus lies, as the official narrative of why Lanza chose Sandy Hook Elementary School according to official sources is now “a mystery motive”.

Where did all that bullshit come from?

Were there ever any retractions made by the media to correct any of this misinformation?

I followed this story very closely, and I don’t remember seeing or hearing about any. Did the amount of information put out by the media confuse people to the point that they did not know what to believe? You bet it did, but the reality is that it did even more than confuse people, it divided them. Divide and Conquer: 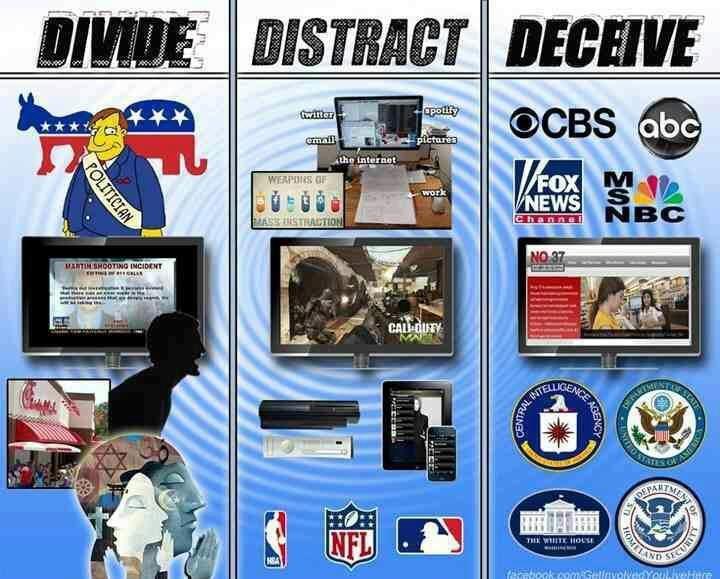 The strategy of divide and conquer is widely used by the mainstream media, and I don’t think most people understand how it is used against them. Whenever you have a conspiracy type event, the mainstream mass media whores flood the media outlets with multiple conflicting facts, stories and information.

This is done deliberately in order to keep people from agreeing on the common core of the subject. Pure truth is usually pretty clear….it’s people and agendas that turn truth a darker shade, or into a different color. Something is usually true or false. The “powers that be” can’t allow their subjects to simply make up their feeble minds as to whether something is true or false. It would be too easy to see through their lies if things were that simple.

As a result, through the mass media, they complicate, distort, and dilute every story and every event to the point where people no longer know what to believe…and even better, they begin to fight amongst themselves over what the truth really is!

How can you unite against a common enemy if you can’t even agree on what the issues are? Please think about how effective this is. Instead of people choosing true or false, they are no longer able to make that simple choice because they don’t know what to believe.

Instead of focusing on what the truth is, they fight amongst themselves about what version presented is true or not. I am pretty sure this provides lots of amusement to the people holding and pulling the strings.

The ‘Man of Steel’ Is Just More Propaganda From A Protected Racket: By Ex Senator Christopher Dodd ~ Current Chairman Of The Motion Picture Association Of America!

So…Next time you find yourself following an event or a story, and you realize that you are being bombarded by undocumented gross speculation from “anonymous” sources all of which seem to offer conflicting facts and information, realize that you are probably being lied to.

If it sounds like a “conspiracy” it probably is one. If all of the bogus information offered up to you leaves you in a position that you are more confused about the facts than before you read the info, that is a sure sign someone is trying to baffle you with bullshit.