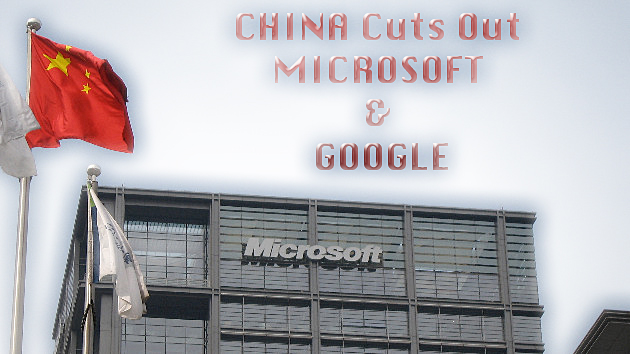 A Chinese-developed operating system may be ready for distribution by October, according to the state-run press agency Xinhua. Likely designed to help reduce the country’s reliance on foreign-made operating systems—especially Windows XP, which remains popular despite no longer being supported by Microsoft—the new OS will first be rolled out for desktops, and will allegedly be coming to smartphones and other devices, too.

The news first broke when Ni Guangnan, the head of the country’s official operating system alliance, spoke to a trade paper run by the Ministry of Industry and Information Technology (MIIT), which deals with the regulation of the country’s software industry.

The product wasn’t named in the reports, however. A previous Chinese-built operating system was called Red Flag Linux, although the company behind it went into liquidation, killing off the project.

There are several reasons why the Chinese may be pushing for their own, home-made operating system again. The first is the end of official support for the aging Windows XP OS, which is still hugely popular in the country. XP makes up 50 percent of China’s desktop market, although a huge chunk of the copies are pirated.

Despite calls from the Chinese government to continue security upgrades to XP, Microsoft axed all support for the system back in April. Without those in place, Chinese users are being forced to upgrade to another OS, or face little protection from new malware and hacking threats.

The second driving force behind the development of Red Flag 2.0 (or whatever they decide to call it) is the business monopoly that US companies have over the market.

In March, the MIIT said that Google has too much power in the smartphone industry because of the popularity of its Android OS. After the release of that white paper, some analysts predicted regulation reforms to mitigate the domination of Google over the market, according to gbtimes.

“Creating an environment that allows us to contend with Google, Apple and Microsoft—that is the key to success,” Guangnan, the operating system alliance head, said in the Reuters translation. That environment has come about, it seems, from the country’s recent ban on all Windows 8 imports for government computers.

Which leads onto the final reason for this new operating system. The ban on Windows 8 came in the wake of the Snowden revelations. After the Guardian and various other outlets detailed how US corporates, willingly or otherwise, have facilitated US spying through their products, companies have had an even more difficult time selling their wares in China.

THEY ARE ALL UNDER SUSPICION AS EITHER WITTING OR UNWITTING COLLABORATORS IN THE US GOVERNMENT’S SURVEILLANCE
US companies have felt a tangible effect on both their profits and how much they are trusted in the country.

“They are all under suspicion as either witting or unwitting collaborators in the US government’s surveillance and intelligence gathering activities,” Scott Kennedy, director of the Research Center for Chinese Politics and Business at Indiana University, told Reuters back in January.

Last month, Chinese officials seized Microsoft computers, emails, and financial info from a number of the company’s offices, in an ongoing antitrust probe, according to Computer World.

Indeed, Xinhua—which naturally has an intimate relationship with the state—made the surveillance aspect explicit in the opener of its article on the new OS.

“After concerns about US surveillance and a monopoly probe of Microsoft, there is some good news for China’s homegrown operating system (OS): a desktop version may be ready in October,” the agency wrote.

It’s not immediately apparent that the Windows 8 ban and subsequent development of China’s own OS are direct responses to the NSA leaks, but as a whole, both are certainly indicative of the long-deteriorating relationship between the two countries when it comes to cyberespionage.

Whether or not China’s latest effort will be able to take over the country’s software market is unclear. As mentioned, Red Flag Linux didn’t have much of an effect at all, and the Windows 8 ban only applies to government systems, not private users. However, if state ministries and departments start to use an OS that the NSA have little influence over, it seems that it may create another layer for the intelligence agency to crack.

OBAMA’S WEB OF DEBT: ITS THE DERIVATIVES STUPID.