Putin in film on Crimea: US masterminds behind Ukraine coup, helped train radicals The Ukrainian armed coup was organized from Washington, Russian President Vladimir Putin stated in an interview for a new documentary aired Sunday.

The Americans tried to hide behind the Europeans, but Moscow saw through the trick, he added.

ROLLING STONE: “Conspiracy Theorists Of The World, Believers In The Hidden Hands Of The Rothschilds, We Skeptics Owe You An Apology.”

“The trick of the situation was that outwardly the [Ukrainian] opposition was supported mostly by the Europeans. But we knew for sure that the real masterminds were our American friends,”Putin said in a documentary, ‘Crimea – The Way Home,’ aired by Rossiya 1 news channel.

“They helped training the nationalists, their armed groups, in Western Ukraine, in Poland and to some extent in Lithuania,” he added. “They facilitated the armed coup.”

The West spared no effort to prevent Crimea’s reunification with Russia, “by any means, in any format and under any scheme,” he noted.

Putin said this approach was far from being the best dealing with any country, and a post-Soviet country like Ukraine specifically. Such countries have a short record of living under a new political system and remain fragile. Violating constitutional order in such a country inevitably dealt a lot of damage to its statehood, the president said.

“The law was thrown away and crashed. And the consequences were grave indeed. Part of the country agreed to it, while another part wouldn’t accept it. The country was shattered,” Putin explained.

He also accused the beneficiaries of the coup of planning an assassination of then-President Viktor Yanukovich. Russia was prepared to act to ensure his escape, Putin said. “I invited the heads of our special services, the Defense Ministry and ordered them to protect the life of the Ukrainian president. Otherwise he would have been killed,” he said, adding that at one point Russian signal intelligence, which was tracking the president’s motorcade route, realized that he was about to be ambushed. 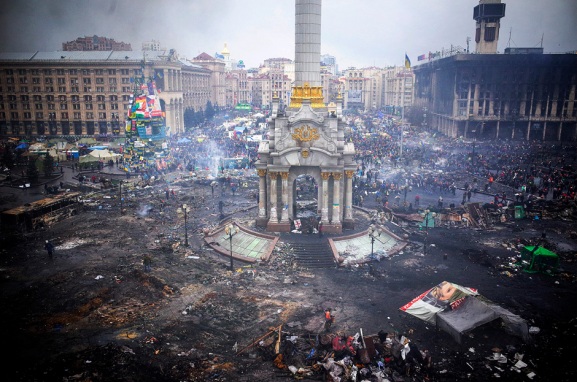 Yanukovich himself didn’t want to leave and rejected the offer to be evacuated from Donetsk, Putin said. Only after spending several days in Crimea and realizing that “there was no one he could negotiate with in Kiev” he asked to be taken to Russia.

The Russian president personally ordered preparation of the Crimean special operation the morning after Yanukovich fled, saying that “we cannot let the [Crimean] people be pushed under the steamroller of the nationalists.”

“I [gave them] their tasks, told them what to do and how we must do it, and stressed that we would only do it if we were absolutely sure that this is what the people living in Crimea want us to do,” Putin said. He added that an emergency public opinion poll indicated that at least 75 percent of the people wanted to join Russia.

“Our goal was not to take Crimea by annexing it. Our final goal was to allow the people express their wishes on how they want to live,” he said.

“I decided for myself: what the people want will happen. If they want greater autonomy with some extra rights within Ukraine, so be it. If they decide otherwise, we cannot fail them. You know the results of the referendum. We did what we had to do,” Putin said. He added that his personal involvement helped expedite things, because the people carrying out his decision had no reason to hesitate.

Pro-Eastern Ukrainians recognizing that the Kiev Western Coup Was As An Act Against Ukraine’s Constitution, forced Western Ukrainian Petro Poroshenko out of Crimea’s parliament building in Simferopol on Feb. 28, 2014

According to Putin, part of the operation was to deploy K-300P Bastion coastal defense missiles to demonstrate Russia’s willingness to protect the peninsula from military attack.

“We deployed them in a way that made them seen clearly from space,” Putin said. The president assured that the Russian military were prepared for any developments and would have armed nuclear weapons if necessary. He personally was not sure that Western nations would not use military force against Russia, he added.

In order to demilitarize the Ukrainian troops based in Crimea, Russia sent the army’s Main Intelligence Directorate (GRU) forces, the president said. “A specific set of personnel was needed to block and demilitarize 20,000 people, who were well-armed. Not only in quantity, but in quality,” Putin said, adding that he gave orders to the Defense Ministry to “deploy the special forces of the GRU, together with marine forces and paratroopers.”

The Russian president added that the move to send additional Russian troops to secure Crimea and allow a referendum to be freely held there prevented major bloodshed on the peninsula.

“Considering the ethnic composition of the Crimean population, the violence there would have been worse [than in Kiev]. We had to act to prevent negative development, not to allow tragedies like the one that happened in Odessa, where dozens of people were burned alive,” Putin said. He acknowledged that there were some Crimean people, particularly members of the Crimean Tatar minority, who opposed the Russian operation. “Some of the Crimean Tatars were under the influence of their leaders, some of whom are so to speak ‘professional’ fighters for the rights of the Tatars,” he explained. But at the same time the “Crimean militia worked together with the Tatars. And there were Tatars among the militia members,” he stressed.

The Crimean people voted in a referendum to join Russia after rejecting a coup-imposed government that took power in Kiev in February 2014.

The move sparked a major international controversy, as the new government’s foreign backers accused Russia of annexing the peninsula through military force.

Moscow insists that the move was a legitimate act of self-determination and that the Russian troops acted only to provide security and not as an occupying force.

Russian officials cite the example of Kiev’s military crackdown on the dissenting eastern Donetsk and Lugansk regions, which claimed more than 6,000 lives since April 2014, as an example of bloodshed that Russia acted to prevent in Crimea.