Welcome to full-blown, unmasked communism in the Big Apple – red, juicy and rotten to its Progressive core. Hundreds lined up to glimpse their Dear Leader. They braved the elements for hours to just catch a glimpse of their anointed one. Congrats New York… enjoy surfing the spiral down into abject chaos and misery. You’ve earned it.

Could the fawning and fake accolades get any deeper or crappier? Let’s see, shall we?

To the many admirers of Mayor Bill de Blasio, the first Democratic [Mob Rule] mayor in two decades, a bitter cold day in January and a massive wait could do little to diminish their glow. Republic-vs-Democracy

“It was awesome. I guess you can say it was like a growth experience for me because I’m grateful my vote counted and the guy I really wanted to get in, got in,” said Helen Marrow, a Manhattan hotel worker, as she waited for her turn with Mr. de Blasio.

“It’s something I never imagined, but I am so thrilled for him and his family and it gives me faith in politics in general,” reflected Marian Fontana, a writer from Staten Island. “I probably waited an hour and a half.”

Mr. de Blasio, looking confident between indecipherable small talk and endless photos–chugging a can of Limoncello to keep fresh in his dark suit and red tie–was feted as the sudden hero of progressives and good-government advocates across the city.

Excuse me… I just threw up in my mouth – a lot. These pampered, spoiled, wealthy idiots have elected a Mayor who will destroy everything they covet. They believe that they are among the elite and will be taken care of, while the lower class – the masses – are kept in line and in their place of servitude.

They are flanked by the useful idiots who believe this false prophet will benefit their station in life somehow. What fools. To have never even read history, but to be destined to repeat its bloody past and worse. Be careful what you wish for Progressives, because you are sure to get it in spades. 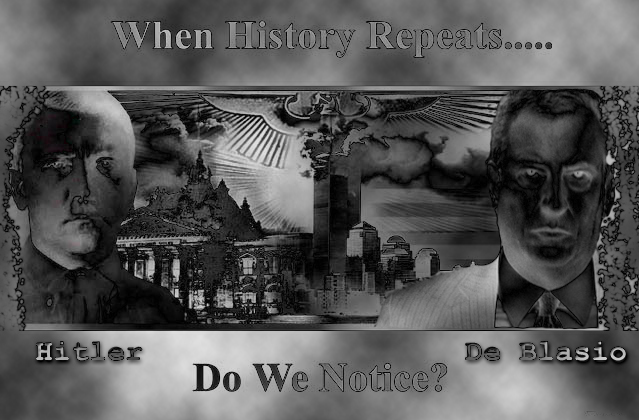 A Global Awakening: Nuremberg, When History Repeats, Do We Notice?

A classic Progressive ploy was used in the ‘red’ event – it was touted as one of the most accessible and transparent ceremonies ever. In reality, it was anything but and showed the jackbooted tactics that will become the calling card of de Blasio and his goons:

But the inauguration, which was touted before-hand as “one of the most open and accessible swearing-in events in New York City history,” also provided a window into how the administration will handle the new crush of attention, with Mr. de Blasio–a former political operative known to be image-conscious–keeping certain aspects of the event tightly controlled.

Along with Bill Clinton, Hillary Clinton, Michael Bloomberg, Andrew Cuomo and the other stars who graced the inauguration stage, various non-political New Yorkers were asked to join them, lending the event an even more populist tinge.

Hours before the speeches began, those New Yorkers sat quietly on folding chairs in the City Hall rotunda. But when Politicker approached a man to ask him about how it felt to take part in the inauguration, security quickly circled and demanded the interview end.

Just Like De Blasio Campaign The Egyptian Citizens Were Duped And Deprived Of An Honest Election!

NWO tried to annex The State Of Egypt

But The Egyptian Citizens Fought Back And Their Ex-President Morsi Now Sits In Prison ~ When Will The U.S> Have Their American Spring?

Later, when reporters tried to approach volunteers at the event, staffers quickly swooped in, saying the volunteers were barred from talking to the press.

And after Mr. de Blasio’s speech, reporters gathered inside on a carpet awaiting the Clintons were ordered by security guards off the carpet and behind columns where several refused to go. When asked who was inside, a de Blasio aide guarding the entrance was terse.

Fascism with a smile and a stylish leather boot – welcome to New York.

Rhetoric at the inauguration was replete with references to the ‘plantation’ and ‘equality for all.’ Common catch phrases for communism these days and the redistribution of wealth. The over-educated and over-valued of New York lapped it up and clamored for more. Oh, and they will, until there is no more to give. These morons have to have someone wipe their posteriors for them – can you imagine how they will deal with the new Cuba? De Blasio supports communist revolutionaries in Latin America.

Never ashamed to use God as a shield to hide behind with lies, these collectivists take blasphemy and their false beliefs to a whole new low:

In particular, Rev. Fred Lucas Jr., who was among several chaplains representing the city’s uniformed workers, surprised many observers by comparing the five boroughs to a “plantation.”

“Oh God, on this first day of January–the anniversary of the first Emancipation Proclamation–sound forth the trumpets of heaven proclaiming a new Emancipation Proclamation in New York City,” he invoked. “From your divine leadership, emancipate every New Yorker from the shackles of fear, futility and frustration … Oh God, end the civil wars and usher in a new Reconstruction Era that builds upon the many successes and achievements of yesterday while proclaiming the beginning of a new beginning.”

No Mature Mandate 2012 By The American People When “”Voting Services”” Were Ordered By Obama To Be Sent To George Soros’s Vote Counting Machines In Spain!

The speaker before Mr. Lucas, civil rights activist Harry Belafonte, was also blunt as he discussed racial tensions and injustices cemented by government policies. (Mr. Belafonte, of course, is not known to be a bashful speaker; during the campaign, he caused controversy after comparing the billionaire Koch brothers to the KKK.)

It is unclear exactly which God the good Reverend was beseeching. Just sayin’. Belafonte is a certified raving lunatic and both are hardcore Marxists. They are using race and religion to implement communism. How people can’t see that, is beyond me. What dupes.

The Washington Post and the other propaganda outlets of the American Marxists fell right into line, praising de Blasio and the resurgence of Progressives. According to them it is a new dawn for America. I’m pretty sure that is a red dawn, but I digress. Every flawed argument for spending, control, the elimination of Constitutional rights and on and on is just more of the same – the clarion call to communism. For some reason a very small minority of radicals seem to be running the country and we can’t wrest control back. We better do so and soon. 2014 is literally do or die for conservatives and the Republic.

New York has gotten the communist leader they deserve in Bill de Blasio. Let not the whole of America follow down that dark and deadly path into a bloody and murderous history.