Brzezinski, one of the most hated and well-known globalists [Of The Carter Administration], recently lamented that there is a global awakening to the source of the tyranny on this planet and that “they” must accelerate their timetable for the completion of a global takeover.

And the full-court press has subsequently been placed on humanity as we are under assault in ways never witnessed before.

The Historical Precedent of Subjugating Through Starvation

The lessons of history clearly demonstrate that dictatorial regimes, whether they be Socialists, Communists, and Marxists will not hesitate to use food as a weapon against their own people in order to solidify power and impose absolute autocratic control.

Food can be withheld from the masses by preventing it from being grown and harvested, by contaminating it and rendering it unfit for human consumption or by simply preventing food from being distributed to a targeted population.

The two most notable examples of dictators using food a weapon in order to destroy the free will of their people comes from the regimes of Stalin and Hitler.

Anita was hired by Barack Obama to direct communications and strategy for his political action committee, The Hope-fund.

While advising Hopefund and Obama, she was instrumental in the preparations for the launch of Obama for America, and brought many key staffers to the Obama campaign with whom she had worked in Bayh’s and Daschle’s offices.

Anita Dunn’s video surfaced about a speech she gave at a May 2009 high school commencement, where she referred to the former communist and depopulating dictator of China Mao Tse Tung as one of her favorite political philosophers.

Josef Stalin engaged in his own Soviet style Holocaust when, in 1932 and 1933, and estimated six to 20 million people in the Ukraine died from starvation when Stalin implemented his prescription of “hope and change” policies in order to eliminate the Ukrainian’s desire for becoming their own nation-state.

Upon assuming power, the Stalinist Communist regime rapidly nationalized the food industry and forced all of the region’s farms into collectives. Thus, Stalin’s version of the Holocaust came to fruition in what history has dubbed, the “Holdomor,” in which millions perished in only a two year period when the Soviet government began to exterminate the Ukrainian population by taking control of food and food production.

Hitler proclaimed that food could be used as a tool “…to discipline the masses” and he did not hesitate to use the control of food as a type of carrot and stick in which he would reward accomplishment and punish failure as well as to ferment preferential class distinctions in which his armed forces received the largest food ration cards.

Skilled workers who were engaged in industries critical to the building of the German war machine, received food ration cards which were slightly less in value. And, finally, the prisoners and the Jews received the lowest valued Nazi food ration cards.

Most recently, Somalia thug, Farah Aideed, systematically starved his people into submission as a brutal civil war raged in both Darfur and Rwanda where the Islamic regimes sought the annihilation of [Christian] ‘infidels’ and the use of food was one of the primary weapons designed to force compliance.

And of course, Pol Pot, Castro and Mao all used food deprivation to quarantine their political opposition and exact absolute allegiance to their respective dictatorial regimes.

It is safe to say that the above mentioned dictators did not rule over countries that enjoyed a Thanksgiving feast similar to what you and I enjoy.

The US Government and Its Mass Starvation Policies

The study was based upon the unproven claims that population growth in Lesser Developed Countries (LDC) constituted a serious risk to America’s national security.

The Earth Is NOT Over-Populated ~ We Can All Fit Into Texas With Our Own Gardens!

In November 1975 President Ford, based upon the tenets of NSSM 200 outlined a classified plan to forcibly reduce population growth in LDC countries through birth control, war and famine.

Ford’s new national security adviser, Brent Scowcroft, in conjunction with CIA  Director, George H. W. Bush, were tasked with implementing the plan and the secretaries of state, treasury, defense, and agriculture assisted in the implementation of these insane genocidal plans.

“Would food be considered an instrument of national power? … Is the U.S. prepared to accept food rationing to help people who can’t/won’t control their population growth?”

Kissinger has answered these questions when he stated that he was predicting a series of contrived famines, created by mandatory programs and this would make exclusive reliance on birth control programs unnecessary in this modern day application of eugenics in a scheme that would allow Henry to have his cake and eat it too in that the world would finally be rid of the “useless eaters!”

Third world population control, using food as one of the primary weapons, has long been a matter of official covert national policy and a portion of pResident Obama’s Executive Order 13603 (EO), is a continuation of that policy.

Only now, the intended target are not the LDC’s but, instead, the American people and after Obama declares martial law, food will undoubtedly be used to subjugate the more resistant regions of our country.

Could Obama Become the Next Stalin?

On the surface, it seems unlikely that any US president would ever starve any segment of the American people to death. However, when one considers the implications of Obama’s EO 13603, there can be no doubt that Obama would not hesitate to make Our Thanksgivings, no more.

ALL EXECUTIVE ORDERS ARE ILLEGAL AND UNCONSTITUTIONAL WHICH VIOLATES THE BILL OF RIGHTS FOR EACH AND EVERY U.S. CITIZEN

Obama has total and absolute control over all food where his EO states:

“Food resources” also means potable water packaged in commercially marketable containers, all starches, sugars, vegetable and animal or marine fats and oils, seed, cotton, hemp, and flax fiber, but does not mean any such material after it loses its identity as an agricultural commodity or agricultural product.

(f)  “Food resource facilities” means plants, machinery, vehicles (including on farm), and other facilities required for the production, processing, distribution, and storage (including cold storage) of food resources, and for the domestic distribution of farm equipment and fertilizer…”

If you thought that you and Fido were going to get through coming food crisis by storing and consuming dog food, think again.

How will farmers maintain the nation’s food supply when all fertilizer, their farm equipment and all of their vehicles are under the control of this sociopath pResident or the next power-hungry President?

The term “all food storage facilities” includes your refrigerator, your pantry and even the very food in your cabinets as well as what is on your kitchen table.

In short, anywhere you keep food is now under the control of the government and can be redistributed.

You Don’t Have To Be A Brain Surgeon Or A

Scientist To See What Is Happening Right Before Our Eyes. 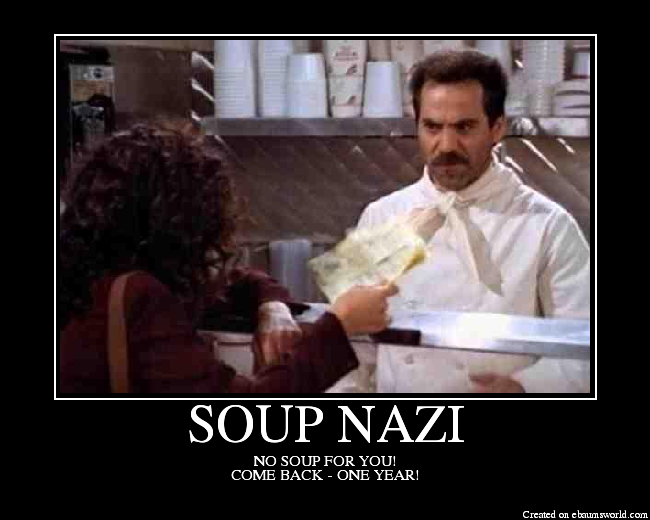 “Obama says, No soup for you, America”.

Were you scratching your head in bewilderment as you watched on the news as the Amish have had their farms raided, raw milk producers have been jailed and the kids running lemonade stands have been shut down and ticketed?

Now you know why these abuses are being perpetrated by the government in that it represents a mere conditioning process designed to get all U.S. citizens used to the idea that the government owns all food and food production. 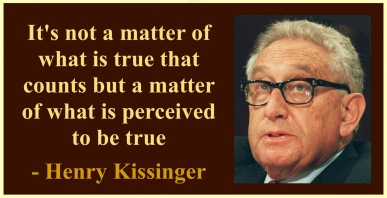 The most clever aspect of this EO is that no Hegelian Dialectic (i.e., false flag event) is needed as a pretense to seize food and imperil survivability.

Section 201(b) of the Obama EO clearly states that this EO is enforceable under both emergency and non-emergency conditions.”

Obama is setting the table to take his place among Stalin, Hitler, Pol Pot, Castro and Mao as another despot in the long line of tyrannical leaders who would grant themselves the authority to subjugate the masses by using food as a weapon.

Americans desperately need to look at history in order to understand what happens every time the people of a government allows the government to control its food supplies and farms. 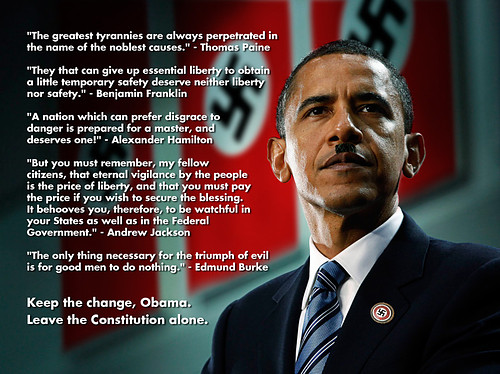 Alert => Banker’s Martial Law Build Up: The Rothschild Government Is Ready For Chaos To Escape Justice For Their Crimes ~ Nuremberg Trials Await Them!