Sign the petition to President Obama to release the text.

New book on Fast track available for free! Lori Wallach co-wrote a book called “The Rise and Fall of Fast Track” that is online for free: http://www.fasttrackhistory.org/ Fast Track is a process used in Congress and without it and it is essential for passage of the TOO.

The Trans-Pacific Partnership (TPP) is poised to become the largest Corporate Trade Agreement in U.S. history. The massive trade and investment pact is currently being negotiated behind-closed-doors between the United States and countries throughout the Pacific Rim — except for 600 big business advisers who are helping to write the law.

Countries currently include the United States, Australia, Brunei, Canada, Chile, Malaysia, Mexico, New Zealand, Peru, Singapore and Vietnam with Mexico and Canada recently joining. The TPP  intended to become the trade law for the world as it includes a “docking agreement” that allows all nations will join over time.

Powerful corporate interests want to use the TPP to:

– Expand the deregulation of banks, hedge funds and insurance companies 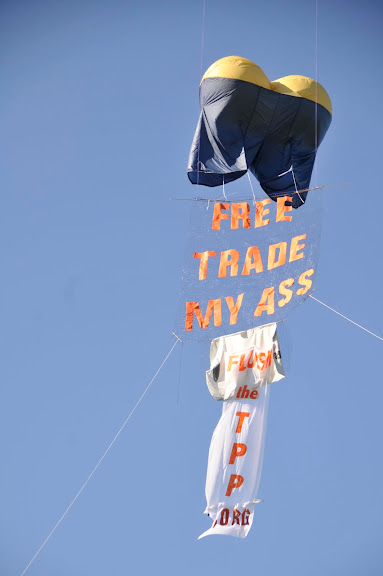 Instead of being debated out in the open, the TPP has thus far been negotiated in the shadows. Approximately 600 corporate lobbyists have been given access to the TPP negotiating texts and advise the U.S. trade negotiators as to exact language of the treaty. Meanwhile, the people whose lives will be affected by the TPP have been barred from even reviewing what negotiators have proposed in our names.

Some sections have been leaked and they show an agreement written by and for transnational corporations including creating a trade tribunal court system that allows corporations to sue governments for potential lost profits, e.g. if a country passes an environmental law corporations can figure out how it will affect their profits and sue the country for these imagined profits.  Making things worse, the judges on these tribunals will be mostly corporate lawyers on leave from their corporate job. They return to their corporation after temporarily serving as a judge.

The plans for the TPP are to complete negotiations in 2012 and have Congress vote up or down on the law. The Obama administration is seeking “fast track” authority from Congress in order to complete the negotiations.  This means there will be no committee hearings, expert testimony or amendments. The Obama administration is taking this anti-democratic approach because they know if this treaty was debated it would never become law. The American people will oppose this law which is why secrecy and fast track are being used.

There are alternatives to agreements like the TPP that empower corporations at the expense of people and the planet. See the 21st Century Trade and Market Access Act.

The fourteenth major round of TPP negotiations took place in Leesburg, Virginia from September 6 to 15. We organized protests so this massive trade pact, this global corporate coup,  would be pushed out of the shadows. 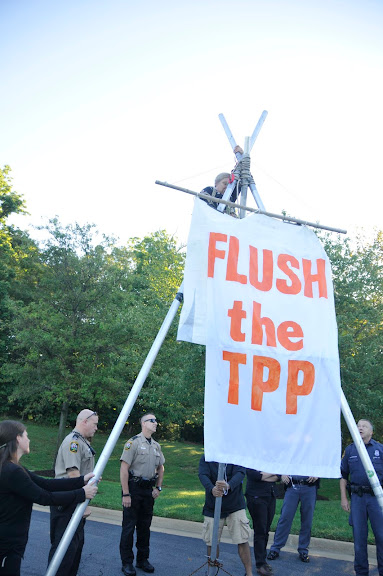 Trade negotiators and corporate lobbyists from the United States and throughout the Pacific Rim met at a fancy resort in Leesburg, Virginia outside of Washington, DC from September 6 to 15 to advance the secretive Trans-Pacific Partnership (TPP) trade agreement — an transnational corporate power grab that would affect the economy, the environment, public health and democracy itself for decades to come.

U.S. negotiators have granted approximately 600 corporate lobbyists access to the negotiating texts, but have flatly refused to tell the public what they have been proposing in our names.  In fact, they don’t intend to tell us what they’ve been working on even after the deal is signed and completed.