Rep. Trey Gowdy (R-S.C.) grilled a University of Baltimore law professor during a Wednesday House hearing and made a compelling case as to why a special counsel is needed to investigate the IRS scandal. At one point, he even offered the professor some “free litigation advice” when he refused to answer one of his questions that seemed pretty straightforward.

Professor Charles Tiefer was brought in by Democrats as an expert to help determine whether the House Judiciary Committee should appoint a special counsel to investigate the IRS scandal.

Tiefer, who previously served as solicitor and deputy general counsel of the U.S. House of Representatives, was also recently asked by Democrats to provide a statement on House Speaker John Boehner’s lawsuit against President Obama, which he called an “embarrassing loser.”

“Professor Tiefer, would you seat a juror who referred to your client as an obscene body part?” Gowdy asked, clearly referring to emails that show ex-IRS official Lois Lerner referring to conservatives as “assholes” and “crazies.”

Professor Tiefer didn’t say a word for about five seconds before he muttered, “I’m sorry?”

Bill Clinton, the 42nd President of the United States, was impeached by the House of Representatives on two charges, one of perjury and one of obstruction of justice, on December 19, 1998.

“Would you seat a juror, in a trial, who referred to your client as an obscene body part?” Gowdy repeated.

“I really have trouble to giving you an answer except that—“ Tiefer began before being interrupted by the South Carolina Republican.

“Well, then you would starve to death as a lawyer if you can’t answer that question, professor,” Gowdy said. “You would seriously consider seating a juror in a trial, a criminal trial, where your client was accused of a crime, if that juror had referred to your client as an obscene body part, you would struggle with whether or not to strike that juror?”

“Well, it doesn’t sound too good,” the professor responded.

“No, it’s not,” Gowdy responded. “And I’ll give you some free litigation advice: You’re going to want to use one of your strikes on that juror.”

Gowdy then asked the professor to imagine that he was a prosecutor and one of the jurors referred to the police as “terrorists” who might bring the country down. When asked if he would seat that juror, Tiefer said he didn’t see the connection between Gowdy’s line of questioning and the investigation into the IRS scandal.

“I’ll give you the connection!” Gowdy proclaimed. “Lois Lerner just referred to conservatives as an obscene body part and she said we were ‘crazies’ and likened us to terrorists!”

At this point, a Georgia congressman attempted to interrupt, but Gowdy was having none of it.

“You are not recognized!” he shouted, refusing to yield any time to his colleague.

Gowdy went on to make his case as to why he believes there is a clear conflict of interest at the U.S. Department of Justice regarding the IRS investigation and therefore a special counsel is needed to conduct an independent review of the targeting scandal.

Benghazi Select Committee Investigation Into Obama, Clinton High Crimes & Misdemeanors Is A Go: Trey Gowdy Will Chair But Watch Him With A Jaundice Eye!

Why would Trey Gowdy Nominate Philip Kiko As Executive Director To Investigate The Benghazi Collusion? Is He Ignorant Of Kiko’s Massive Conflict Of Interests?

Either Way, With This Level Of Incongruence With Impartiality, One Is Left Wondering If This Is Another Issa Appearing Damage Control Committee For The NWO. Is This Just Another Dog & Pony Show Frustrating The United States Constitutional Justice System?

Trey Gowdy May Act Sensationally Like Issa, but he may be just another toothless dog ~ time will tell.

The background of  Philip Kiko….

Trey Gowdy announced that Phil Kiko would come on board as majority staff director.

“Phil brings with him years of experience serving in various capacities in the House and the Executive Branch, including top positions for three Committees,” Gowdy said in a statement. “He has a proven record of effective leadership and management, and I am pleased to have him on our team as we conduct a serious, fact-driven investigation to ensure our fellow Americans know the full truth about what happened in Benghazi.”

The American people are supposed to trust Republicans appointed to investigate Benghazi but they shouldn’t once our findings are examined. As it turns out, the Executive Director appointed to the House Select Committee on Benghazi has a serious conflict of interest that should require him to recuse himself.

Not only is it beyond troubling that the new Executive Director to investigate Benghazi – Philip Kiko – is a lobbyist for the Smith-Free Group, in which his clients include the American Civil Liberties Union (ACLU), Southern Poverty Law Center (SPLC), the radical environmentalist group the Sierra Club, Gay, Lesbian and Straight Education Network (GLSEN), Mexican American Legal Defense and Educational Fund (MALDEF), National Council of La Raza “the Race” (NCLR), and the National Organization for Women (NOW), NAACP Legal Defense and Educational Fund (NLDEF) and others, but it also turns out that he lobbied for a group with strong connections to [Obama’s] Muslim Brotherhood front groups in the U.S.

This constitutes a major problem.

Let’s address the elephant in the room. When it comes to Benghazi, the attackers all resided under the Muslim Brotherhood umbrella.

Kiko, appointed by Committee Chairman Trey Gowdy, has been a lobbyist for Smith-Free Group since 2013. One of Smith-Lee’s clients is the Leadership Conference on Civil Rights, a consortium of racial and liberal organizations that includes the highly suspect Muslim Advocates (MA).

There also appears to be a connection to Wisconsin politicians. The head of MA used to work for U.S. Senator Russ Feingold (D-WI) and Kiko for Rep. James Sensenbrenner as Deputy Chief of Staff from 2001 – 2007.

Sensenbrenner is credited with authoring the Patriot Act.

MA’s President and Executive Director Farhana Khera worked directly for Feingold for six years and was Counsel to the U.S. Senate Judiciary Committee.

Ironically, a primary focus of Khera has been to water down the Patriot Act to protect Muslims.

The degree to which she was successful can be seen in both how politically correct the law is as well as Feingold being the only U.S. Senator to vote against the law.

Khera represented the Muslim Students Association (MSA) in the U.S. in Canada in a suit filed against the City of New York over the surveillance of the Muslim community. MSA is a known Muslim Brotherhood front group and Khera is clearly a pro-Muslim activist who has argued that sting operations lead to “anti-Muslim sentiment”.

In 2010, Khera spoke at the Islamic Society of North America (ISNA) convention. In her speech, Khera tipped off Muslim leaders about law enforcement surveillance techniques. ISNA is also a Muslim Brotherhood front.

Perhaps one of Khera’s most prized accomplishments was a letter she received from then-Deputy National Security Adviser John Brennan, who is currently the Director of the CIA. Brennan’s letter was in response to a letter sent by Khera and 57 Muslim organizations requesting that training materials offensive to Muslims be purged from counter-terrorism manuals. Brennan expressed agreement with Khera in his response. 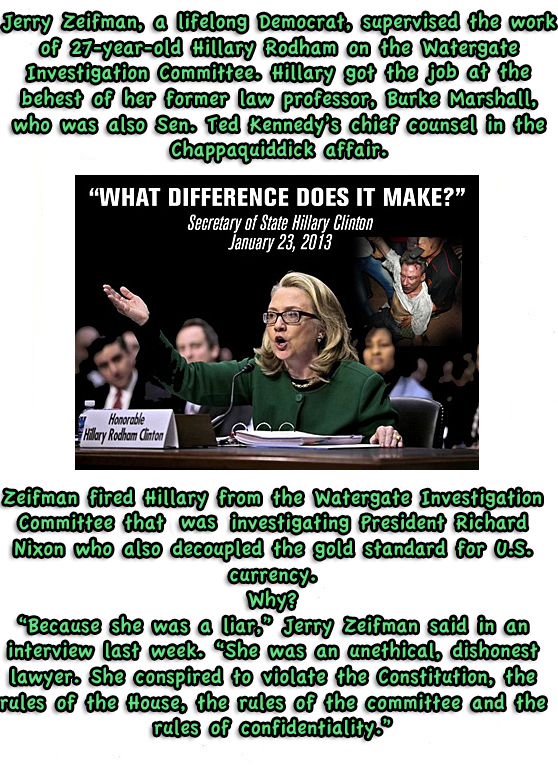 When former Deputy Chief of Staff to Hillary Clinton Huma Abedin found herself at the center of controversy after Rep. Michele Bachmann raised questions about Abedin’s ties to the Muslim Brotherhood, at least one Muslim Advocates member expressed support for Abedin.

Board member Amber Khan sent out the following tweet about Abedin’s attendance at the White House iftar dinner in 2012: 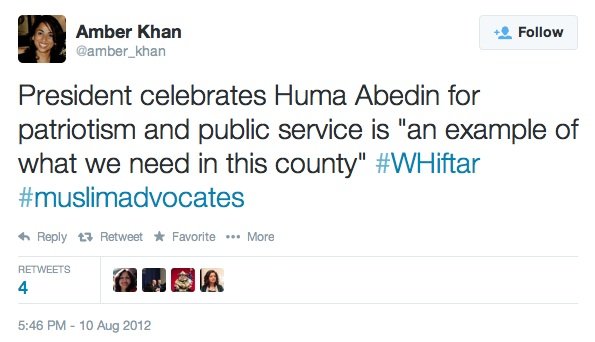 Curiously, Kiko’s former boss – Sensenbrenner – was one of a handful of Republicans who publicly defended Abedin, thereby siding against Bachmann.

Rep. Keith Ellison, one of two Muslim U.S. Congressmen, was one of Abedin’s staunchest of defenders against Bachmann. Ellison responded to Bachmann’s questions with an incoherent two-page letter that was rebuked with a 16-page letter from Bachmann; it would be her last public words on the matter. Exposing Minnesota’s Muslim Brotherhood: Calling Keith Ellison Out!

Ellison also has a connection to Muslim Advocates. The organization’s Director of Program to Strengthen Muslim Charities, Mohamed Sabur, was once an employee of Ellison.

Sabur is also credited with founding The Qunoot Foundation. This organization is a partner with CAIR. Muslim Advocates is identified as a kind of offshoot from the Muslim Brotherhood front. In fact, their advocates work with CAIR. In fact, on CAIR’s official website, an application was accepted for a CAIR / Qunoot Fellowship.

Another co-founder of Qunoot Foundation – Zahier Janmohamed – supports Hamas, which is itself a Muslim Brotherhood group whose beliefs are in line with the Benghazi attackers.

Other figures on the Muslim Advocates website that warrant further scrutiny are Deputy Director Naheed Qureshi and Board Asifa Quraishi-Landes.

As we have learned, the Qureshi name (can be spelled differently) is quite prominent within the Muslim Brotherhood. Suheir Qureshi was identified by Shoebat.com as one of the 63 Muslim Sisterhood leaders. Naheed joined other Muslim Brotherhood figures at the 2010 White House Iftar Dinner, to include Huma Abedin’s mother Saleha Abedin.

Here is a promo video on the Muslim Advocates website, the organization under the LCCR umbrella Kiko has registered to lobby for. The video features Sabur, Khera, and Ellison:

One of the partners of this firm is Cleta Mitchell, who inexplicably defended Grover Norquist and Suhail Khan in the face of overwhelming evidence of their complicity in the Muslim Brotherhood agenda.

The evidence against both Norquist and Khan is incontrovertible. Yet, Mitchell chose to vehemently defend them while smearing those who pointed out their Muslim Brotherhood connections, as Shoebat.com reported. The extent of Kiko’s relationship with Mitchell is unclear but it is noteworthy that both Mitchell and he have either advocated for or defended individuals or groups with connections to the Muslim Brotherhood. As a partner with Foley, Mitchell would have been senior to Kiko, who was listed as ‘Of Counsel’.

Kiko Should Recuse Himself:

Shortly after Speaker John Boehner appointed Trey Gowdy to head the House Select Committee on Benghazi, Gowdy appointed Kiko. To what extent Boehner may have had a hand in Gowdy’s naming of the longtime DC lobbyist is not known but Boehner sure seemed pleased with the appointment immediately after it was announced, saying:

Like Sensenbrenner, Boehner was one of the handful of Republicans who defended Abedin against Bachmann, as Shoebat.com reported.

Let’s face it, Congress has a poor track record with the American people. It’s a place where corruption thrives like weeds in a garden that needs constant tending. Despite this, there is an industry in Washington, DC that is viewed with even more contempt, perhaps the most unprincipled profession in the nation’s capital – lobbying.

Often, the extent to which any one lobbyist’s principles – or lack thereof – can be known are by looking at his clients.

When doing this with Kiko, it becomes apparent that he should recuse himself from the Benghazi investigation. Boehner, Gowdy and every member of the House Select Committee should demand it.

Alana Cook contributed to this report.