Stocks are on a tear right now…

And that’s not all. If you’ve been reading the Dispatch, you know the global economy is not in good shape.

So why are U.S. stocks making new highs?

Today, we take a look at the big picture to help you make sense of the market’s mixed signals. As you’ll see, right now is a dangerous time to get back into stocks…

The Labor Department released a strong jobs report on Friday. The U.S. economy created 287,000 jobs last month. That’s the most in eight months.

Many investors saw the strong jobs report as proof that the economy is doing OK. But the jobs report is a “noisy” indicator. It fluctuates a lot from one month to the next. This makes it unreliable.

As you may remember, U.S. companies hired just 38,000 workers in May. That was the fewest workers added in one month since 2010. That’s why you often need to “take a step back” to understand how an economy is really doing.

Over the weekend, Barron’s explained that U.S. companies are still hiring at one of the slowest rates in two years:

With a small downward revision to April and May, employment gains in the April-June quarter averaged just 147,000. Except for the three months from March through May, when the gain ran 114,000, 147,000 is the slowest three-month increase since February 2014.

• The world is now racing toward a full-blown banking crisis…

If you’ve been reading the Dispatch, you know the recent “Brexit” triggered a crash in European banks. Many of these banks are now down more than 50% over the past year.

But it’s not just European banks that are struggling. Major banks across the world are now trading like a major crisis is on the way. Mitsubishi UFJ Financial Group, Inc. (MTU), Japan’s biggest bank is down 38% over the past year. U.S. banking giant Citigroup (C) is down 24%.

The weak global economy is a major reason why banks are struggling to make money. It’s hurt demand for loans, which is how many banks make most of their money.

Low interest rates are also starving banks of income. Regular readers know low rates have “taken over the world.” According to MarketWatch, global interest rates are at the lowest level in 5,000 years. With rates near all-time lows, banks are making less money on every loan they make.

That’s because many of these stocks are trading at the lowest prices in years. Some have never been cheaper. But that doesn’t mean they can’t get even cheaper still.

According to The Wall Street Journal, the recent selloff could trigger another leg down in bank stocks:

Sharp share-price falls will make it much more difficult, and expensive, for banks to raise capital if that is what is ultimately needed to shore up their balance sheets.

Just as bad, a serious decline in market value can breed inaction among bank executives. Instead of selling equity when they can, executives may wait for share prices to recover, only to find themselves in a worse situation as stocks drop even further.

We see an even bigger reason to avoid bank stocks.

• Italy’s banking system looks like it’s about to collapse…

Italian banks have more than €360 billion worth of “bad” loans (ones trading for less than their book value). That’s equal to about one-fifth of the country’s annual economic output.

Italian banks are in worse shape than U.S. banks were before the 2008 financial crisis.

In Italy, 17% of banks’ loans are sour. That is nearly 10 times the level in the U.S., where, even at the worst of the 2008-09 financial crisis, it was only 5%. Among publicly traded banks in the eurozone, Italian lenders account for nearly half of total bad loans.

The situation at Banca Monte dei Paschi di Siena SpA, the country’s third biggest bank, is so bad that the company assigned a team of 700 people to deal with its bad loans. Last Tuesday, Bloomberg Business warned that the company is at high risk of default.

Monte Paschi’s stock has plunged 83% over the past year.

DEUTSCHE BANK BUILT THIS: DO YOU WANNA PLAY A GAME? ~ DEATH IS A SURPRISE PARTY.

These emergency measures won’t fix anything. At best, they’ll buy Italy time. But years of weak economic growth and destructive government policies will eventually cause Italy’s banking system to collapse. And because Italy is the fourth largest country by GDP in Europe, a banking crisis would almost certainly spread to the rest of Europe.

Soros, who is one of history’s greatest [Criminal NWO] traders, warned that European banks would be “severely tested” going forward.

“Europe is extremely sick and must start dealing with its problems extremely quickly, or else there may be an accident,” Deutsche Bank’s David Folkerts-Landau said, according to the newspaper. “I’m no doomsday prophet, I am a realist.”

Again, pumping money into Europe’s fragile banking system won’t solve any problems. It would be like putting a Band-Aid on a gunshot wound.

• We encourage you to own physical gold…

As Dispatch readers know, gold is the ultimate safe haven. That’s because it’s real money. It’s preserved wealth for thousands of years because it possesses a rare set of attributes: It’s durable, easily divisible, and easy to transport. Its value doesn’t depend on “faith” in a government or central bank.

Of course, the threat of a global banking crisis isn’t the only reason to own gold. As regular readers know, there’s an even bigger threat to your wealth… 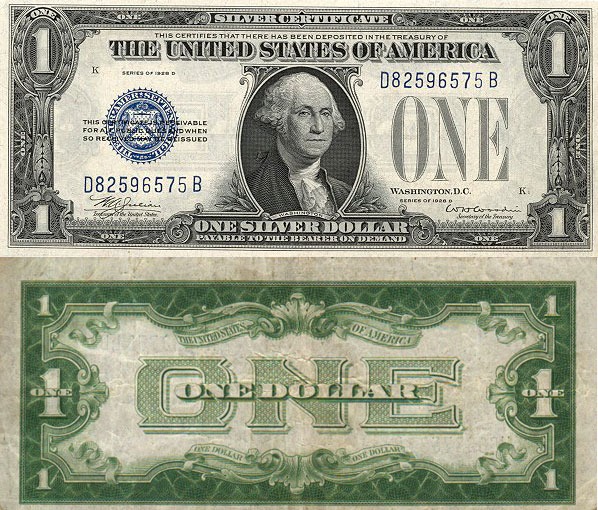 When U.S. Currency Was Backed By Silver.