The Syrian Armed Forces launched their assault on Tal Humiryah from the imperative town of Hader, which is located near the Israeli-occupied Golan Heights region. 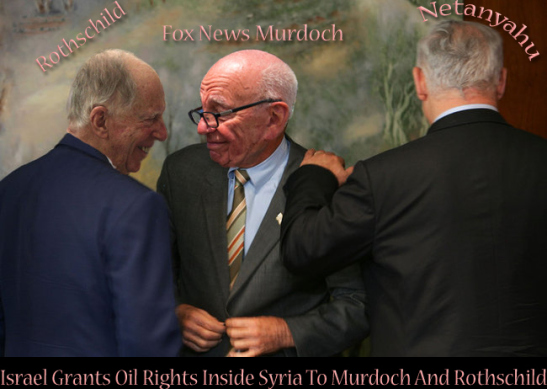 Netanyahu has the audacity to sell Murdoch & Rothschild Syria’s Oil

What could cause Russia to invade Israel:

At the time, Israel’s Prime Minister had flown to Washington, and was making a desperate bid to get Obama’s support for Israeli sovereignty over the Golan Heights.

Only a few weeks earlier a discovery had been made that would serve to increase tensions on the question of sovereignty over the Golan – huge oil deposits were found on the Golan Heights, and verified by an Israeli company.

It wasnt long before the United Nations – including Russia – condemned Israels “occupation” of the Golan Heights, and around the same time, Syria asked Russia to develop their oil resources.

Then, over the course of the next 6 months, the Israeli leadership became very concerned about Russian activity near the Golan.

“Prime Minister Benyamin Netanyahu will visit Moscow on Thursday, April 21 to meet with Russian President Vladimir Putin and to launch the most important battle of his political career, and one of Israel’s most decisive contests of the last 10 years: the battle over the future of the Golan Heights.

What to watch for in October:

DEBKAfile’s intelligence sources and its sources in Moscow report exclusively that Israel’s top political leaders and military commanders were stunned and shocked last weekend when they found out that US President Barack Obama and Russian President Vladimir Putin have agreed to support the return of the Golan to Syria.

The two presidents gave their top diplomats, Secretary of State John Kerry and Foreign Minister Sergei Lavrov, the green light to include such a clause in a proposal being drafted at the Geneva conference on ending the Syrian civil war.

In 1981, during the tenure of then Prime Minister Menachem Begin, Israel passed a law defining the Golan as a territory under Israeli sovereignty. However, it did not state that the area belongs to Israel.

[The U.N. does not recognize Israel controlling Syria’s Golan Heights ~ its a red herring]

While Israel was preparing for a diplomatic battle over the future of Jerusalem, Judea and Samaria, Obama and Putin decided to deal a diplomatic blow to Israel and Netanyahu’s government on an unexpected issue, the Golan.

[This has nothing to do with Obama] 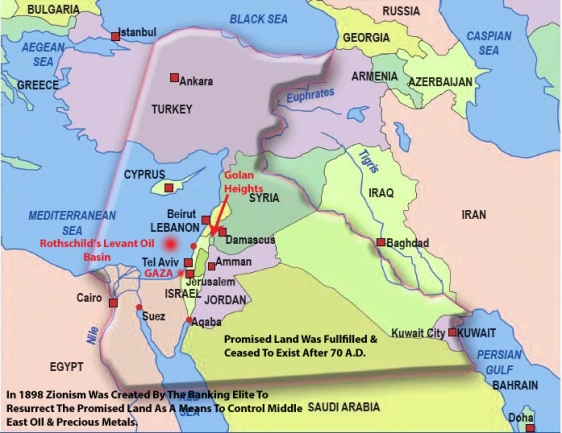 This Is Rothschild’s Present Day Resurrection Plan To Control The Middle East Oil Hub. The Banking Cabal Uses A False Biblical Narrative Of A Promised Land That Needs To Be Returned To The Old Testament Jew. The Promised Land Was Fulfilled And Ceased To Be After 70 A.D.

It is part of an endeavor by the two powers to use their diplomatic and military cooperation regarding Syria to impose agreements on neighboring countries, such as Israel, Turkey, Saudi Arabia and Jordan.

[This is a ruse] Obama & Netanyahu both Rothschild Czars are joined at the hips ~ Israel Sends Ukraine Nazis Assault Weapons After Obama Sends Netanyahu $40 Billion For Military Armament.

For example, Washington and Moscow are trying to impose an agreement regarding the granting of independence to Syrian Kurds, despite Ankara’s adamant opposition.

The two presidents are also pressuring Riyadh and Amman to accept the continuation of Syrian President Bashar Assad’s rule, at least for the immediate future.

[Pure poppycock there is zero pressure from the west on this one ~ it was Russia that made it so.]

DEBKAfile’s sources report that just like the other diplomatic or military steps initiated by Obama and Putin in Syria, such as those for Assad’s eventual removal from power is factually,

the two powers see a resolution of the Golan issue as a gradual process that may take a long time, perhaps even years. But as far as they are concerned, Israel will have to withdraw from the Golan at the end of that process.

[Obama A Rothschild Czar would push for an Israeli withdrawal after his protege’ Rothschild Czar Netanyahu fraudulently sold oil rights to Rothschild and Murdoch of Fox News inside Syria’s Golan Heights? Pure Poppycock]

It should be noted that Prime Minister Netanyahu is not traveling to Washington to discuss the Golan issue with Obama. The frequent trips by the prime minister, senior officials and top IDF brass to Moscow in recent months show where the winds are blowing in the Middle East.

However, Moscow is not Washington, and Israel has no lobby in the Russian capital defending its interests.

It should be made very clear that the frequent trips by senior Israeli officials to Moscow have not created an Israeli policy that can influence Putin or other senior members of the Russian leadership. Putin has made occasional concessions to Israel on matters of minimal strategic importance, but on diplomatic and military steps regarding Syria and Iran he has shown little consideration of Jerusalem’s stance.

It should also be noted that there has been no basis for the enthusiasm over the Russian intervention in Syria shown by Netanyahu, Israeli ministers and senior IDF officers.

All of the calls by a number of Russia experts, mainly those of DEBKAfile, for extreme caution in ties with Putin have fallen on deaf ears among the political leadership in Jerusalem and the IDF command in Tel Aviv.

Amid these developments, three regional actors are very pleased by Washington and Moscow’s agreement to demand Israeli withdrawal from the Golan: Syrian President Assad, the Iranian leadership in Tehran and Hizballah leader Hassan Nasrallah.

[Fiction when including Washington]

Now, they do not need to risk a military confrontation with Israel over the Golan because Obama and Putin have essentially agreed to do the dirty work for them.

[Fiction when including Obama] U.S. Cabal Is Losing Control In The Middle East As More Countries Turn Towards Russia.