We’ve already written about this trend several times this year. Our most recent article is linked below and I strongly encourage you to read this post as a refresher before you continue.

2016 has seen a very unusual “delivery” pattern for gold on the Comex.

Consistent with surging open interest and surging demand for gold in all its forms around the world, “deliveries” of gold through the Comex have increased as well.

However, when you compare “deliveries” [“The Khan” which are paper promissory notes] for 2016 versus 2015, you’ll notice that the divergence and increase didn’t really begin in earnest until June of this year. 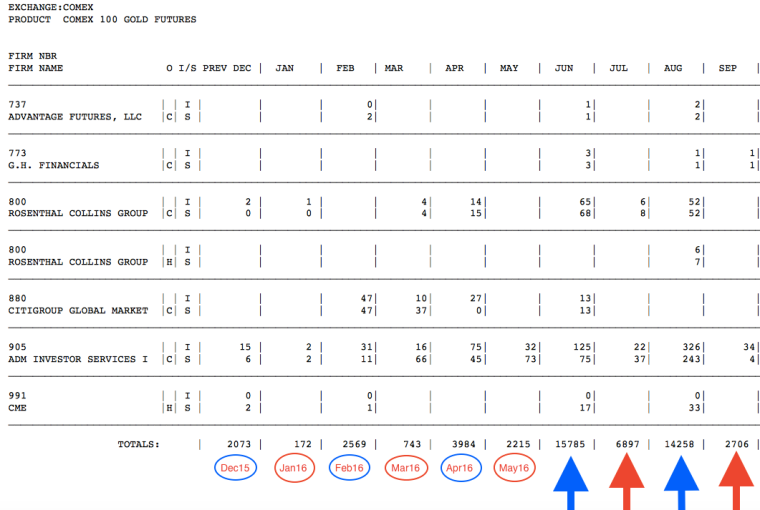 However, beginning with the “delivery month” of June, [2016] Comex gold “deliveries” began to explode at a startling pace:

And now look at what has happened during the month of October … which is historically the lightest “delivery month” on the Comex calendar:

And this gets even more interesting when you drill down into the day-by-day “deliveries” and open interest:

However, as you can see below, it has been a very busy month. You should also be sure to note the current total:

So, contributing to the total “delivery” number that exceeds last October by a factor of 9.5, there has been a surge of new open interest that has entered the October 16 contract with the intention of either making or taking immediate “delivery” of gold…electing not to wait for November or the huge “delivery month” of December. The additions of open interest so far total 1,523 contracts for 152,300 ounces or nearly 5 metric tonnes.

You can see the entire report here:

And this is also interesting. Note the sudden involvement of two firms which had, heretofore, had very little if any activity:

If this trend continues, you can be certain that the new bull market for price, which began early this year, will continue into 2017 and beyond.

← The Zionist Elite Have Lost The Consent Of The Governed: Meet The Lecters!
NWO’s Nightmare: The Fall Of Obama & Netanyahu’s Eunuchs In Aleppo! →