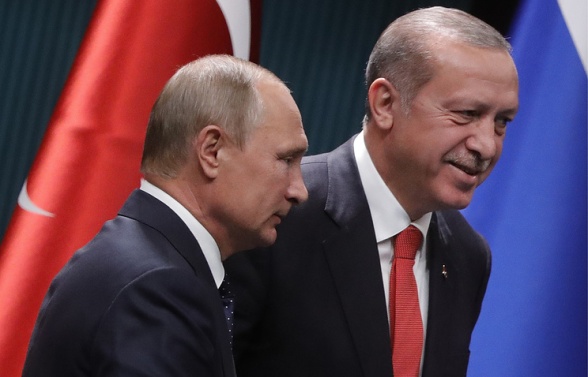 He refused to go into details about the talks between Putin and Erdogan, which related to the referendum.

“I only want to repeat the words spoken by President Putin at yesterday’s news conference, that our position regarding Kurdistan is well known, it remains unchanged, it was expressed clearly in the Foreign Ministry’s recent statement,” Peskov said, adding “the discussion was in line with it.”

Ankara and Moscow support the territorial integrity of Iraq and Syria, Turkish President Tayyip Recep Erdogan said on Thursday at a news conference where he took the podium along with Russian President Vladimir Putin. He also said it was essential “to prevent the government of Iraqi Kurdistan from making a still graver error,” meaning the referendum on the independence of Iraqi Kurdistan.

Putin said that he and Erdogan had discussed the referendum regarding Iraqi Kurdistan, among other things.

“Russia’s principled stance on the issue is known well enough,” he said. “Our Foreign Ministry laid it out in a statement. Mr. President (Erdgoan) and I spoke about the problem in detail today.”

“Moscow respects the national aspirations of the Kurds,” the ministry said in a statement. “We believe that all points at issue between Iraq’s federal authorities and the leadership of the Kurdish Autonomous Region may and should be solved through a constructive and respectful dialogue aimed at developing a mutually acceptable formula of co-existence as part of a unified Iraqi state.”

“We maintain our support for the sovereignty, unity and territorial integrity of our friendly state of Iraq and other countries of the Middle East,” the ministry stressed.

The foreign ministry emphasized that it is of key importance now to “avoid everything that poses a risk of further complicating and destabilizing the Middle East region, which is already overburdened with conflicts.”

Iraq’s Kurdistan region held an independence referendum on Monday. According to the Rudaw TV channel, more than 90% of 3.44 million Iraqis voted for creating an independent state. Baghdad strongly opposes the referendum, calling it unconstitutional. Turkey and Iran were also against it, favoring the Arab country’s territorial integrity. Washington and some other EU states also believe the referendum is inexpedient at the moment, as it undermines efforts in the war on terror and regional security.

The Kurdistan Region of Iraq, also known as Iraqi Kurdistan, is an autonomous region in the north of the country, with its legal status fixed in the Iraqi constitution of 2005.

“If we don’t decentralize, the country will disintegrate,” Haider al-Abadi bluntly declared in a speech Wednesday to the Center for Strategic and International Studies.
“To me, there are no limitations to decentralization.

← Corruption Is An Obsession, A “Woodworm”. “A Good Politician Is Also A Martyr”
Updated Death Toll & Devastation By The Illegal Occupation Of Palestine By Israel →