The House on Friday passed legislation that defunds ObamaCare but would keep the government running through mid-December.

The legislation was approved on a party line 230-189 vote, with Rep. Scott Rigell (Va.) the only GOP no vote. Two Democrats voted for the measure, Reps. Jim Matheson (Utah) and Mike McIntyre (N.C.).

Passage of the bill sets up a showdown with the Senate, and moves the two sides closer to a possible government shutdown Oct. 1.

The ObamaCare language is expected to be stripped from the bill in the Senate, setting up a critical week of negotiations next week. House Republicans have canceled a planned recess to return to Washington Wednesday, and their leaders have warned the House could be in next weekend.

After the vote, nearly the entire House Republican conference crowded into the Rayburn Room off the House floor to demand that the Senate follow suit in defunding the healthcare law. The rally was a show of unity amid a series of fiscal battles that have deeply divided the conference.

The lawmakers giving a rousing cheer to Speaker John Boehner (R-Ohio) and Majority Leader Eric Cantor (R-Va.), just over a week after many of them rejected their initial plan to take a less aggressive approach to the healthcare law in the spending bill.

“It’s time for us to say no,” Boehner said of the law. “It’s time to stop this before it causes any more damage to American families and American businesses.”

Turning the event into an overt political rally, Cantor listed off the names of vulnerable Democratic senators up for reelection in 2014 and cited problems with the healthcare law in their states. The names he listed were Sens. Mark Pryor (Ark.), Kay Hagan (N.C.), Mary Landrieu (La.) and Mark Begich (Alaska).

“We’re into this fight and we want the Senate to join us,” Cantor said.

Republicans opposed to the ObamaCare defunding effort have warned that if the government does shutdown, the strategy would make it easier for Democrats to blame Republicans. Some in both parties see a shutdown as the one thing that could lead Democrats to win back a House majority next year.

Republicans during Friday’s debate insisted that they have no desire to see a shutdown.

“A government shutdown is a political game in which everyone loses,” said Appropriations Committee Chairman Hal Rogers (R-Ky.). “It shirks one of our most basic duties as members of Congress, and it puts our national security at stake.

“A government shutdown — even the illusion of the threat of a shutdown — says to the American people that this Congress does not have their best interests at heart.”

But Minority Leader Nancy Pelosi (D-Calif.) called the GOP bill a clear attempt by Republicans to bring the government to a halt.

“What is brought to the floor today is without a doubt … a measure designed to shut down government,” she said. “It could have no other intent. Its purpose is clear.

“It is a wolf in wolf’s clothing.”

Republicans defended the healthcare defunding language as a reaction to increasing reports that the law is causing serious harm to the economy.

“Each week, we hear stories about how both major employers and small businesses are cutting back benefits and cutting back hours,” Cantor said. “The president’s healthcare law is turning our full-time economy into a part-time economy.

“Let’s defund this law now and protect the American people from the economic calamity that we know ObamaCare will create.”

On Thursday, Republicans made it plain that, with such large differences between the two parties, the only way forward on a government-funding bill is to let both houses of Congress act and then hopefully find a way forward. Boehner said Thursday that once the House passes a bill reflecting the will of House Republicans, Senate Republicans would have to do their best to influence the bill.

Sen. Mike Lee: ‘We Have Support in Senate’ to Defund ObamaCare

“We’ll deliver a big victory in the House tomorrow and then this fight will move over to the Senate, where it belongs,” Boehner said Thursday. “I expect my Senate colleagues to be up for the battle.”

The Club for Growth and Heritage Action have vowed to punish Republicans in future elections if they did not support the CR.

“With enrollment starting on October 1 for the state exchanges, Congress must act quickly to bar funds for this disastrous law.”

Senate Democrats are already working on a plan to strip out the ObamaCare language through a simple-majority vote that would render Republicans powerless. The Senate may also seek to strike language requiring the Treasury Department to prioritize debt-service payments in the event of a government shutdown, language Democrats broadly oppose.

That raises the prospect of the Senate sending a “clean” resolution back to the House late next week. House Ways & Means Committee ranking member Sandy Levin (D-Mich.) anticipated this possibility during today’s debate and openly questioned whether Boehner would allow a vote on a clean resolution in the face of GOP opposition.

“Will he act as the captain of the entire House of Representatives or remain a captive of his right-wing Republican mates?” Levin asked.

The spending resolution that passed the House on Friday sets total funding for discretionary federal programs at $986.3 billion per year, the same level seen in fiscal 2013. That level would require a $19-billion cut next year to stay consistent with the sequester’s requirements for 2014. 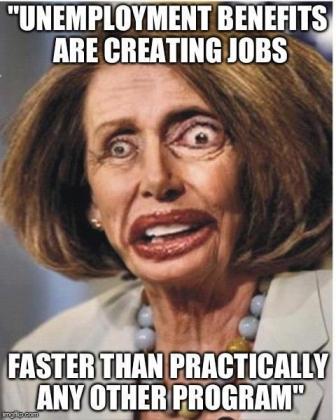 But Republicans supported the idea of keeping up the pressure for reduced federal spending.

“For the first time since the Korean War, it’ll be possible to have two consecutive years of discretionary spending cuts,” Cantor said.