This Colbert Video Has Been Removed From YouTube But You Can Still View The Video At The Link Below.

Much like Al Qaeda, the Islamic State (ISIS) is made-in-the-USA, an instrument of terror designed to divide and conquer the oil-rich Middle East and to counter Iran’s growing influence in the region.

The fact that the United States has a long and torrid history of backing terrorist groups will surprise only those who watch the news and ignore history.

The CIA first aligned itself with extremist Islam during the Cold War era. Back then, America saw the world in rather simple terms: on one side, the Soviet Union and Third World nationalism, which America regarded as a Soviet tool; on the other side, Western nations and militant political Islam, which America considered an ally in the struggle against the Soviet Union.

The director of the National Security Agency under Ronald Reagan, General William Odom recently remarked, “by any measure the U.S. has long used terrorism. In 1978-79 the Senate was trying to pass a law against international terrorism – in every version they produced, the lawyers said the U.S. would be in violation.”

Someone In Corporate Government Is Afraid. 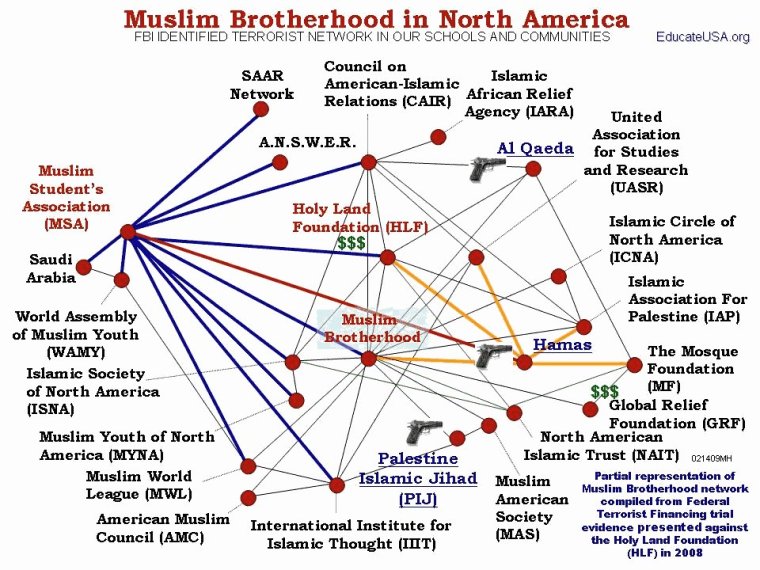 NWO’s Use Of The CIA Created Muslim Brotherhood Within The Continental United States. Why? To Over Throw The United States Constitution By Innocuous Subterfuge.

During the 1970′s the CIA used the Muslim Brotherhood in Egypt as a barrier, both to thwart Soviet expansion and prevent the spread of Marxist ideology among the Arab masses. The United States also openly supported Sarekat Islam against Sukarno in Indonesia, and supported the Jamaat-e-Islami terror group against Zulfiqar Ali Bhutto in Pakistan. Last but certainly not least, there is Al Qaeda.

Lest we forget, the CIA gave birth to Osama Bin Laden and breastfed his organization during the 1980′s. Former British Foreign Secretary, Robin Cook, told the House of Commons that Al Qaeda was unquestionably a product of Western intelligence agencies. Mr. Cook explained that Al Qaeda, which literally means an abbreviation of “the database” in Arabic, was originally the computer database of the thousands of Islamist extremists, who were trained by the CIA and funded by the Saudis, in order to defeat the Russians in Afghanistan.

America’s relationship with Al Qaeda has always been a love-hate affair. Depending on whether a particular Al Qaeda terrorist group in a given region furthers American interests or not, the U.S. State Department either funds or aggressively targets that terrorist group. Even as American foreign policy makers claim to oppose Muslim extremism, they knowingly foment it as a weapon of foreign policy.

The Islamic State is its latest weapon that, much like Al Qaeda, is certainly backfiring. ISIS recently rose to international prominence after its thugs began beheading American journalists. Now the terrorist group controls an area the size of the United Kingdom. 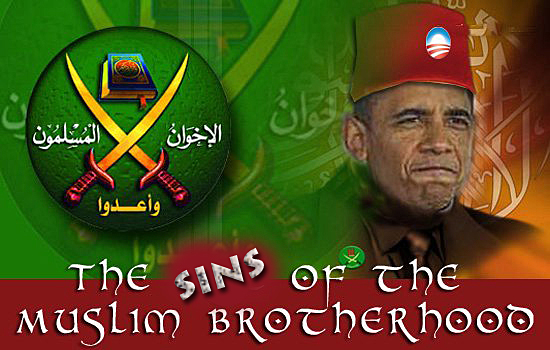 In order to understand why the Islamic State has grown and flourished so quickly, one has to take a look at the organization’s American-backed roots. The 2003 American invasion and occupation of Iraq created the pre-conditions for radical Sunni groups, like ISIS, to take root. America, rather unwisely, destroyed Saddam Hussein’s secular state machinery and replaced it with a predominantly Shiite administration.

The U.S. occupation caused vast unemployment in Sunni areas, by rejecting socialism and closing down factories in the naive hope that the magical hand of the free market would create jobs. Under the new U.S.-backed Shiite regime, working class Sunni’s lost hundreds of thousands of jobs. Unlike the white Afrikaners in South Africa, who were allowed to keep their wealth after regime change, upper class Sunni’s were systematically dispossessed of their assets and lost their political influence. ISIS Is The Pretext Obama Is The Liar: Iraq’s Dead 9,656 In 2013 ~ 12,034 To Date September 18, 2014.

Rather than promoting religious integration and unity, American policy in Iraq exacerbated sectarian divisions and created a fertile breading ground for Sunni discontent, from which Al Qaeda in Iraq took root.

The Islamic State of Iraq and Syria (ISIS) used to have a different name: Al Qaeda in Iraq. After 2010 the group rebranded and refocused its efforts on Syria.

There are essentially three wars being waged in Syria: one between the government and the rebels, another between Iran and Saudi Arabia, and yet another between America and Russia. It is this third, neo-Cold War battle that made U.S. foreign policy makers decide to take the risk of arming Islamist rebels in Syria, because Syrian President, Bashar al-Assad, is a key Russian ally. Rather embarrassingly, many of these Syrian rebels have now turned out to be ISIS thugs, who are openly brandishing American-made M16 Assault rifles.

America’s Middle East policy revolves around oil and Israel. The invasion of Iraq has partially satisfied Washington’s thirst for oil, but ongoing air strikes in Syria and economic sanctions on Iran have everything to do with Israel. The goal is to deprive Israel’s neighboring enemies, Lebanon’s Hezbollah and Palestine’s Hamas, of crucial Syrian and Iranian support.

John McCain photographed inside Syria at a secret meeting with al-Qaeda’s Abu Bakr al-Baghdadi, the Commander of the Islamic State terror group known as ISIS.
Al-Qaeda used the moniker ISIS in Iraq.

ISIS is not merely an instrument of terror used by America to topple the Syrian government; it is also used to put pressure on Iran.

The last time Iran invaded another nation was in 1738. Since independence in 1776, the U.S. has been engaged in over 53 military invasions and expeditions.

Despite what the Western media’s war cries would have you believe, Iran is clearly not the threat to regional security, Washington is.

An Intelligence Report published in 2012, endorsed by all sixteen U.S. intelligence agencies, confirms that Iran ended its nuclear weapons program in 2003.

Truth is, any Iranian nuclear ambition, real or imagined, is as a result of American hostility towards Iran, and not the other way around.

America is using ISIS in three ways: to attack its enemies in the Middle East, to serve as a pretext for U.S. military intervention abroad, and at home to foment a manufactured domestic threat, used to justify the unprecedented expansion of invasive domestic surveillance.

The so-called “War on Terror” should be seen for what it really is: a pretext for maintaining a dangerously oversized U.S. military. The two most powerful groups in the U.S. foreign policy establishment are the:

which profits from the former group’s actions. Since George W. Bush declared the “War on Terror” in October 2001, it has cost the American taxpayer approximately 6.6 trillion dollars and thousands of fallen sons and daughters; but, the wars have also raked in billions of dollars for Washington’s military elite.

In fact, more than seventy American companies and individuals have won up to $27 billion in contracts for work in postwar Iraq and Afghanistan over the last three years, according to a recent study by the Center for Public Integrity. According to the study, nearly 75 per cent of these private companies had employees or board members, who either served in, or had close ties to, the executive branch of the Republican and Democratic administrations, members of Congress, or the highest levels of the military.

In 1997, a U.S. Department of Defense report stated, “the data shows a strong correlation between U.S. involvement abroad and an increase in terrorist attacks against the U.S.”

Truth is, the only way America can win the “War On Terror” is if it stops giving terrorists the motivation and the resources to attack America.

Terrorism is the symptom; American imperialism in the Middle East is the cancer. Put simply, the War on Terror is terrorism; only, it is conducted on a much larger scale by people with jets and missiles. 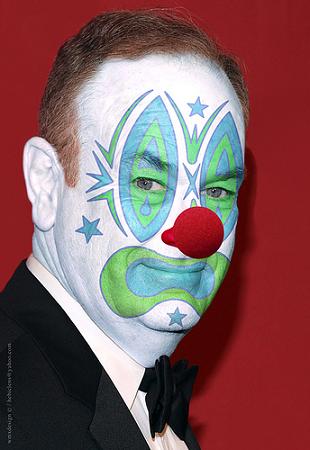 O’REILLY PART OF THE  NWO MSM!