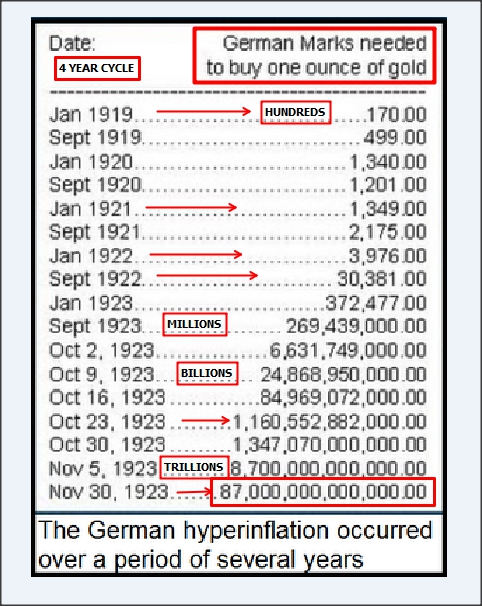 On the heels of eight weeks of chaotic trading in markets, today the man who has become legendary for his predictions on QE, historic moves in currencies, and major global events, just warned the world is headed toward anarchy, hyperinflation and a frightening endgame.

Egon von Greyerz: “We are now seeing the perfect bull trap in stock markets Eric. After a fall this year in the Dow of 2,450 points, we have now seen a rally of 1,250 points, which is roughly a 50% retracement…

Egon von Greyerz continues: “So investors have no fear and still expect the normal pattern of eternal bull markets with minor corrections. Sadly most investors are lulled into a sense of false security with this rally.

But this is what happens when a trend turns: Investors will either remain long or continue to buy every pullback in the certainty that central banks will once again save them. However, this time they will be mightily surprised, because this bear is soon going to resume its downtrend with a vengeance.

After a 7-year bull market and a tripling of the Dow, we have now started a secular bear market that will destroy trillions of dollars of assets worldwide. It is likely that the fall in most global indices will be at least 80-90% (in real terms) before this secular bear market has finished.

As you know Eric, I have incessantly warned investors to get out of all bubble assets such as stocks, bonds and property. But most investors will stay invested in the market until they reach their bottoms, and this is why the world will experience the most gigantic wealth destruction in history in coming years.

The War On Cash

But for the very small minority who actually get out of these assets, it is of course not sufficient to remain in cash. The war on cash by global governments is now in high gear. Countries are now attacking cash in hand by limiting the amount people can withdraw from their bank, such as the maximum €1,000 in France and Italy. Cash in the bank is also being punished with zero or negative interest rates.

So anyone who keeps money in the bank will earn a negative return after bank fees in many countries. But that is just the beginning. It will get a lot worse because most governments will see to it that investors’ cash will become worthless in the next few years.

First, depositors will be forced to invest in government bonds to finance the growing budget deficits. As government borrowings grow exponentially, these bonds will collapse in value and eventually become worthless.

Second, all currencies will collapse under the weight of money printing and credit expansion. And the US dollar, the Euro and most other currencies will reach their intrinsic value of ZERO!

Third, the banking system is unlikely to survive with a leverage of up to 50 to 1, excluding the $1.5 quadrillion of worthless derivatives. So whatever assets a customer has left in the bank ~ it will disappear in the bankruptcy of the whole financial system. And no one should believe that they will get their segregated assets back. It will take years, if not decades, to sort out such a major bankruptcy.

Also, bank creditors will find that just like in the case of MF Global, the bank will have used the segregated assets as security for their trading lines.

The people who will make a fortune for years and years are insolvency lawyers and accountants. They are preferential creditors and will probably be the only ones who will be paid out.

I would recommend any young people who are starting higher education now to enter the insolvency profession. They will have a secure job for almost a lifetime and make more money than most people.

So if assets in the bank should be avoided what should we invest in?

What Areas Will Thrive In The Coming Depression?

Many areas will perform relatively better in the coming depression. Pawnbroking is one. Many people will need to pawn their valuables. A lot of people will resort to theft and burglary just to survive, so another sector that will do well is the security industry. This area will be massive due to law and order breaking down. This will include anything from alarms, locks, fencing, gates, window shutters, to security guards and sophisticated electronic surveillance systems.

Another area I believe will do well is agricultural land and farming. There will be major food shortages and food prices will rise dramatically because of hyperinflation.

For anyone who is prepared to think outside the box, whether it is on a very small or larger scale, there will be lots of opportunities.

Many conventional businesses and services will disappear. Anyone with a bit of inventiveness can set up small businesses which can fill the gaps of major companies going under.

Coming back to wealth preservation, Eric, the best way to insure as well as enhance wealth in coming years is to hold physical gold and some silver. Gold and silver are cash, liquidity and they can be used for barter. Precious metals will not only maintain purchasing power, like they have done for thousands of years, but will in the coming crisis they will appreciate in real terms a lot faster than anyone can imagine.

I believe that today is the last chance to buy gold and silver at a reasonable price. Just as the stock market is soon likely to resume its downtrend, I expect the precious metals to begin an acceleration to the upside in the next few weeks. And that could happen so fast that most investors will be left behind waiting for another pullback.

But investors must remember that gold and silver are not an investment, but insurance against a fragile financial system. Therefore, like fire insurance, it must be bought before the fire, and that fire could start at any time.

In the next five years I expect paper money, stocks, bonds, property, art, etc, to decline 90-100% against gold and silver.

I know that most people will ridicule that prediction and find it totally implausible. That is because most individuals do not realize that the increase in asset prices during the last one hundred years has nothing to do with appreciation in real terms, nor with investment skills.

What has happened is that a small minority of people have built up massive wealth due to the fractional banking system (leveraging deposits up to 50 times), and due to irresponsible governments spending money they don’t have, this has allowed debts to grow exponentially. Central bankers have added to this pain by creating money out of thin air. It is this credit expansion that has created false asset prices.

Since the creation of the Fed in 1913, world debt has gone from virtually nothing to over $230 trillion. And that doesn’t include unfunded liabilities which are in the hundreds of trillions plus the derivatives of $1.5 quadrillion.

So we are living in a bubble that could initially expand by quadrillions of dollars through unlimited money printing by governments in a futile attempt to save the current system.

But it is of course not possible to solve a problem using the same method that caused it in the first place.

Exponential money printing will destroy virtually all currencies and create anarchy at all levels of society. Money printing will only exacerbate the problem, not solve the disastrous crisis the world is heading into.

Therefore, after the hyperinflationary period, there needs to be a deflationary implosion that totally extinguishes all debt.

As debt implodes, so will all the assets that the debt has driven to astronomical heights.

Eric, although this process may take quite a while to play out, it could also happen a lot quicker than any of us can imagine. Once a bubble of this magnitude bursts, it is impossible to understand the extent of the consequences both in time and magnitude.

Financial analyst Bix Weir says the mother of all money meltdowns is a sure thing. Weir contends there is one big question everybody should be asking. Weir says, “What’s the dollar going to be worth? What’s fiat money going to be worth after the banks crash?”

So, can the financial powers keep manipulating the U.S. dollar forever?

Weir say, “I think they can, they have and they will as long as it is in the United States’ advantage.

It’s been our advantage to run this un-backed fiat system. We have been the world’s reserve currency for a long time. Now, we are the largest debtor nation in the world.

Now, we have all these problems with currencies. It’s turning into a place where it is no longer to our advantage. With the click of a mouse, we can end this game.”