Whats the point of having Stock Charts if it is not charting U.S. Supply & Demand instead of Bank Con-Controlled Manipulation?

The Dow-20,000 hats have come out of the drawer after an agonizingly long wait that had commenced in early December with the Dow Jones Industrial Average tantalizingly close to the sacred number before the selling started all over again.

But when it comes to revenues of the 30 Dow component companies – a reality that is harder to doctor than ex-bad-items adjusted earnings-per-share hyped by Wall Street – the picture turns morose.

The 30 Dow component companies represent the leaders of their industries. They’re among the largest, most valuable, most iconic American companies. And they’re periodically booted out to accommodate a changed world. For example, in March 2015, AT&T was booted out of the Dow, and Apple was inducted into it, as its ubiquitous iPhone had become the modern face of telecommunications. New blood with booming revenues replaces the stodgy old companies. In aggregate, revenues should therefore rise, right?

But the other day, I was asked about the revenues of all Dow components, after having lambasted the revenue debacles of two, IBM [Big Shrink to “Hire” 25,000 in the US, as Layoffs Pile Up] and Cisco [Cisco Buys 45th Company in 5 Years, Revenues Still Stagnate].

So here we go. Fasten your seatbelt. 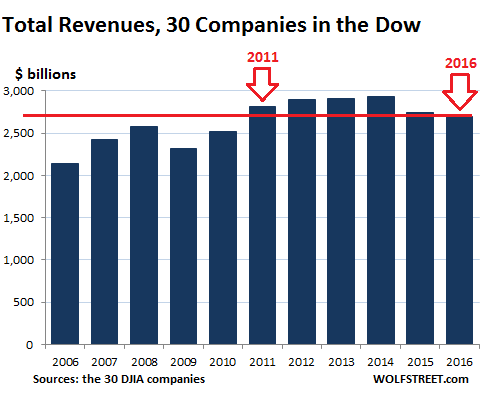 OK, you say, it’s the oil bust’s fault. The energy companies did it. Sure enough, there are two huge energy companies in the Dow, Exxon Mobil and Chevron. Alas, their revenues started dropping long before the oil bust occurred. Revenues peaked in 2011 for both of them, at a combined $740 billion. By the end of 2014, before the oil bust hit in earnest, revenues had already dropped 16% to $624 billion. And by 2016, they were down to $351 billion, having plunged 53%.

Of the Dow components, four, including Exxon Mobil, have not yet reported their earnings for fiscal Q4 2016. To approximate revenues for the fourth quarter, I took the year-over-year growth rate of the first nine months and applied it to the revenues as reported in Q4 2015. It’s not perfect, but it’s close. And given the vast aggregate numbers – trillions – any divergence for that quarter gets lost in the rounding error.

So here are the revenues of the Dow components without Exxon Mobil and Chevron: 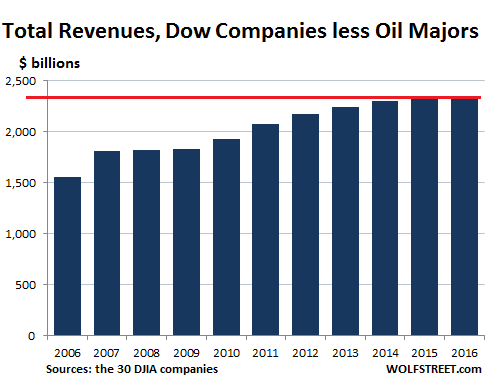 Ah-ha, you say. It’s all the oil bust’s fault. Without the oil companies that have been ravaged by the oil bust, revenues are fine. OK, maybe not fine. Revenues without the oil bust companies are up 13% since 2011. That’s an average annual growth rate of 2.5%, barely above the rate of inflation!

But the DJIA hit 20,000 with the oil majors in the average. So in looking at the relationship between aggregate revenues and stock price movements, we need to leave them in the mix.

And reality looks even worse. Apple, whose revenues have skyrocketed by over 1,000% since 2006, from $19.3 billion to $216 billion, became a Dow component in 2015, replacing AT&T. And its revenues weren’t part of the 30 Dow components until 2015. So here’s what the aggregate revenues of the Dow components look like without Apple (blue columns) and without Apple but with AT&T (brown columns). A pure stagnation fest: 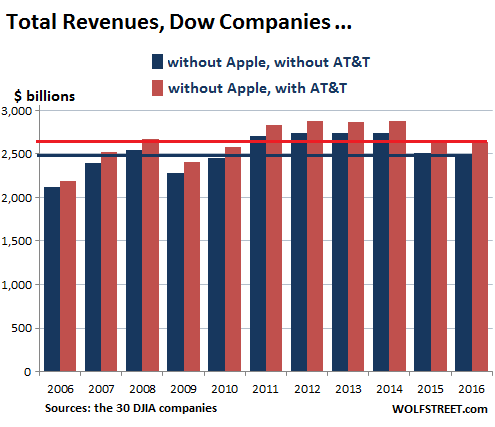 So how have the last two years been? Don’t even ask.

But the stock market is full of hocus-pocus, and actual revenues, as reported under GAAP, over time, are obscured the best way possible, just as magicians obscure their sleight of hand by distracting their audience with some flashy moves. So when I bring up “revenues,” everyone says, “Who cares about revenues?”

OK, I get it. It’s all about the adjusted ex-bad-items earnings-per-share – the Great American fiction – along with “leveraged share buybacks” funded with borrowed money, other forms of adroit financial engineering, and crowd-pleasing new metrics.

Roman Catholic J.R.R. Tolkien ~ My political opinions lean more and more to Anarchy (philosophically understood, meaning abolition of control not whiskered men with bombs) … the most improper job of any man, even saints (who at any rate were at least unwilling to take it on), is bossing other men. Not one in a million is fit for it, and least of all those who seek the opportunity. – J. R. R. Tolkien

Tolkien’s encounter with the depths of Christian mysticism and his understanding of the truths of orthodox theology enabled him to unravel the philosophy of myth that inspired not only the “magic” of his books but also the conversion of his friend C.S. Lewis to Christianity.

This relentless and eager focus on Wall Street hocus-pocus explains in part why the DJIA has soared 73% over the five years to 20,000 even as aggregate revenues, despite the delirious acquisition binge, have been mired down in a sea of stagnation.

The US economy hasn’t escaped the consequences of this corporate revenue stagnation, as hopes for a strong finish were gutted. Read… Back Below “Stall Speed”: 2016 Economy Matches Worst Year since Great Recession

Walk Away From The Rothschild Hoarding Matrix: The World Fights Back!

J.R.R. Tolkien The Catholic Who Wrote The Hobbit & Lord Of The Rings Warning All About Rothschild