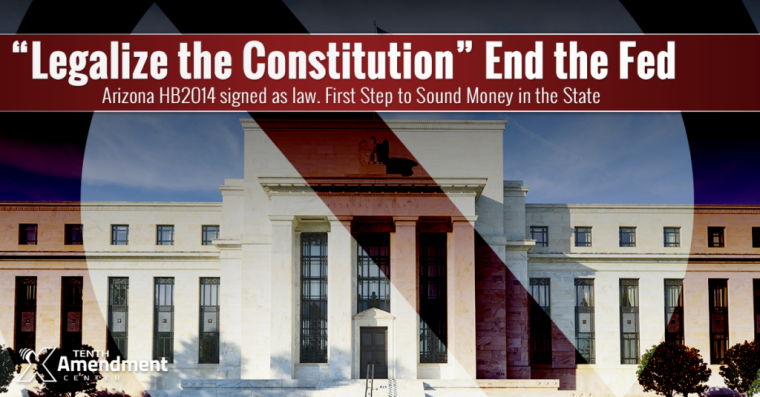 MONTGOMERY, Ala. (Feb. 8, 2018) –  Earlier today, the Alabama Senate unanimously passed a bill that would exempt the sale of gold and silver bullion from state sales and use tax, encouraging its use and taking the first step toward breaking the Federal Reserve’s monopoly on money.

Sen. Tim Melson (R-Florence) introduced Senate Bill 156 (SB156) on Jan. 11. The legislation would exempt the gross proceeds from the sale of gold, silver, platinum, and palladium bullion in the form of bars, ingots or coins from sales and use tax in the state for five years after the date of enactment.

A similar bill is moving through the Alabama House.

Imagine if you asked a grocery clerk to break a $5 bill and he charged you a 35 cent tax. Silly, right? After all, you were only exchanging one form of money for another. But that’s essentially what Alabama’s sales tax on gold and silver bullion does. By removing the sales tax on the exchange of gold and silver, Alabama would treat specie as money instead of a commodity. This represents a small step toward reestablishing gold and silver as legal tender and breaking down the Fed’s monopoly on money.

We ought not to tax money – and that’s a good idea. It makes no sense to tax money,” former U.S. Rep. Ron Paul said during testimony in support an Arizona bill that repealed capital gains taxes on gold and silver in that state. “Paper is not money, it’s fraud,” he continued.

The proposed law’s impact would go beyond mere tax policy. During an event after his Senate committee testimony, Paul pointed out that it’s really about the size and scope of government.

Practically speaking, eliminating taxes on the sale of gold and silver would crack open the door for people to begin using specie in regular business transactions.This would mark an important small step toward currency competition. If sound money gains a foothold in the marketplace against Federal Reserve notes, the people would be able to choose the time-tested stability of gold and silver over the central bank’s rapidly-depreciating paper currency.

The United States Constitution states in Article I, Section 10, “No State shall…make any Thing but gold and silver Coin a Tender in Payment of Debts.” States have simply ignored this constitutional provision for years. It’s impossible for a state to return to a constitutional sound money system when it taxes gold and silver as a commodity.

This Alabama bill takes a step towards that constitutional requirement, ignored for decades in every state. Such a tactic would set the stage to undermine the monopoly of the Federal Reserve by introducing competition into the monetary system.

Once things get to that point, Federal Reserve notes would become largely unwanted and irrelevant for ordinary people. Nullifying the Fed on a state by state level is what will get us there.

SB156 will move to the House for further consideration.