A decade after the US military waged two barbaric sieges of Fallujah, the Iraqi city is once again facing a bloody armed conflict.

The army of Iraqi President Nouri al-Maliki has massed artillery and tanks on Fallujah’s outskirts and has already bombed and shelled civilian neighborhoods, inflicting an unknown number of casualties. Thousands have fled the city in fear for their lives, and the United Nations has warned that the cut-off of water, food and fuel is creating a humanitarian catastrophe.

Maliki has vowed to launch a full-scale assault on the city unless its inhabitants succeed in persuading armed insurgents to surrender.

In April and again in November-December of 2004, Fallujah was turned into a killing field by the US occupation. From the air it was pummeled by AC-130 Specter gunships, F-16 fighter jets and Apache attack helicopters.

On the ground, a force of over 10,000 US troops backed by tanks and artillery was assembled to attack the city. Bombs, missiles and white phosphorous shells—chemical weapons banned under the Geneva conventions—were unleashed against the population. Hospitals and ambulances were targeted.

In the end, fully one out five buildings in the town were destroyed, while two-thirds of what remained were damaged. Hundreds of thousands were turned into homeless refugees. At least 120 US troops were killed in the two sieges, while no accurate count of how many thousands of Iraqis were killed has ever been made.

Much of the US media coverage of the current situation in Fallujah, Ramadi and elsewhere in Iraq’s western Anbar province, has begun from the standpoint of what a shock and disappointment these events represent, given the enormous “sacrifice” made by the US occupation to pacify the area a decade ago.

The Iraq war is once again being cast as a humanitarian venture aimed at fighting terrorism and bringing democracy to the Iraqi people.

The barbaric attack on Fallujah constituted a war crime.

In its aims, scope and ferocity, it was comparable to the kind of collective punishment meted out by the Nazis against resisting populations in occupied Europe. It was emblematic of the criminal character of the entire US war.

Foisted onto the American people with lies about non-existent “weapons of mass destruction” and ties between Baghdad and Al Qaeda, the war was a premeditated act of aggression launched to further US imperialist aims [Rothschild International Banking Cabal] to assert hegemony over the Middle East and its vast energy reserves.

Having failed to secure a guarantee of legal immunity for remaining US troops, Obama ordered the last of them withdrawn from Iraq little more than two years ago. The Iraqi people, however, have been left to deal with the bitter legacy of nearly nine years of US military occupation. Meanwhile, Washington’s quest for hegemony in the region has continued, most notably through the war to topple Muammar Gaddafi in Libya and its fomenting and support for a war for regime change against the government of Bashar al-Assad in Syria.

In Fallujah and Ramadi, the consequences of the crimes of US [Rothschild] imperialism, both past and present, have come together in an explosive form.

The confrontation, presented by the corporate media as a struggle against Al Qaeda terrorists, has deep roots in the sectarian divisions that were instigated by the US war and occupation as part of a deliberate divide-and-rule strategy. They succeeded in pitting Iraq’s majority Shi’ite population against the minority Sunnis, while the Kurdish minority in the north has been allowed to pursue regional autonomy, while conflicts over borders and rights to oil wealth threaten to erupt into civil war there as well.

The government of Prime Minister Nouri al-Maliki, installed [Puppet] under the US occupation, has pursued an openly sectarian agenda, ruthlessly purging leading Sunni political figures, using the security forces to crack down on the population of Anbar and branding protests against these abuses of power as acts of Al Qaeda terrorism.

At the end of December, the Maliki regime touched off the present conflict by moving to arrest Ahmed al-Alwany, a prominent Sunni member of parliament in Ramadi—killing his brother and five bodyguards in the process—and then on December 30 sending in security forces to break up a protest encampment that had existed in the same city for months, killing at least 17 more.

Amid seething popular anger, armed groups, including both the [CIA CREATED] Al Qaeda-affiliated Islamic State in Iraq and the Levant (ISIS) and local tribesmen, seized control of police stations, drove out the security forces and set up local checkpoints, effectively taking over Fallujah and much of Ramadi.

The Obama administration has responded by declaring its full support to Maliki and rushing weapons, including Hellfire missiles, drones and other equipment to his military.

It is exerting maximum pressure on Congress to end its delay on shipment of Apache attack helicopters and F-16s to the regime. That this weaponry, in the hands of a regime that has become ever more sectarian and authoritarian, may soon be used to massacre civilians has presented no obstacle to the Obama White House.

Washington has presented its military aid as an imperative driven by the threat of [CIA Fomenter] Al Qaeda, with Secretary of State John Kerry describing those who have seized Fallujah as “the most dangerous players in that region.”

The reality is that such aid is one of the principal means of control and influence that Washington still exerts over Baghdad. While the troops have left, a 1,000-man Office of Security Cooperation-Iraq based at the US embassy remains, including both US military personnel and contractors.

It [Obama] has managed hundreds of military sales contracts amounting to over $9 billion [in Iraq] since the end of the occupation.

US contractors, most of them ex-special operations troops, remain “embedded” with Iraqi forces as “advisors.”

As for the supposed threat from Al Qaeda, that is also largely of Washington’s own making.

The ISIS has been vastly strengthened by the US-backed war for regime change across the border in Syria, where it has been armed and funded by the US’s closest allies, particularly Saudi Arabia.

The hypocrisy and cynicism of US policy in the region is summed up in Washington’s denunciation of Syria’s bombardment of ISIS forces in Aleppo, even as it rushes more missiles to Iraq so that Maliki can bomb them in Fallujah.

Embodied in this glaring contradiction is the dual use that Washington makes of [CIA’s] Al Qaeda, employing it as a proxy where it suits its purposes—as in Afghanistan in the 1980s, and more recently in Libya and Syria—and then using it as a bogeyman to justify intervention, as in Afghanistan and Iraq a decade ago and once again in Iraq today. 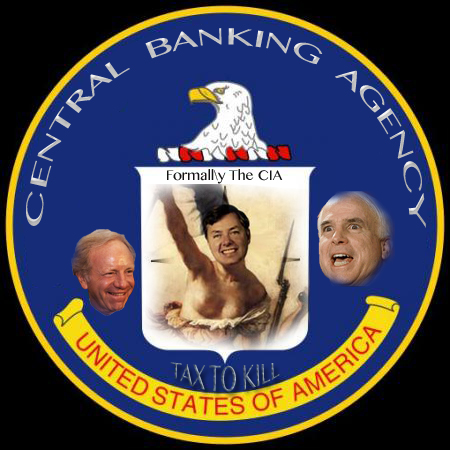 Al-Qaeda Murder 24 Civilians Near Ras al-Ain, Syria: There Is No Al-Qaeda ~ There Is CI-Aeda.

The prospect that US imperialism may be able to further warm its hands over the fire it has ignited in Fallujah was indicated by the New York Times on Monday, in an article highlighting the “common enemies” shared by Washington CIA Chaos Fomentation Operation For Syria] and Tehran in Iraq. It suggested that the rapprochement between the US and Iran can extend beyond a deal on the Iranian nuclear program into turning Iran into a force for “stability” in the region.

Such a realignment, however, would hardly resolve the deep social, political and class conflicts tearing apart the Middle East, and would only be exploited by [Rothschild’s] US imperialism to further its broader quest for [NWO] global hegemony, particularly through confrontation with China. 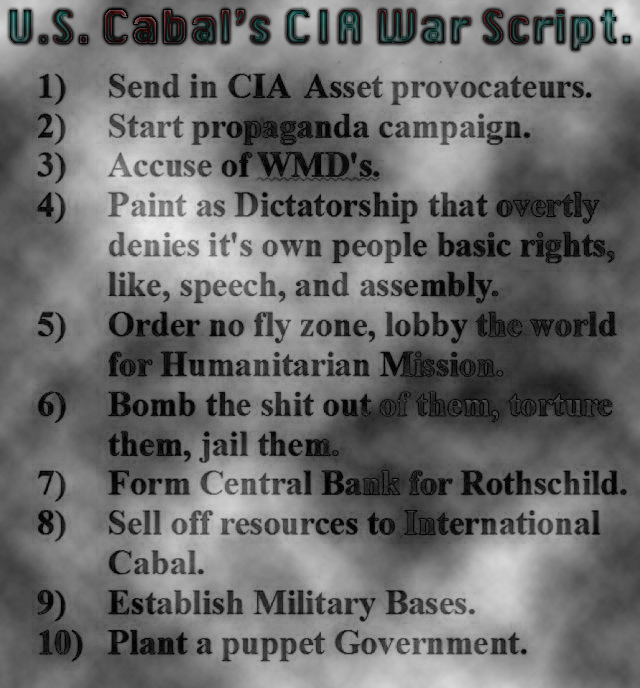