Iranian elite paramilitary force leader Major General Qassem Soleimani accused the United States of having “no will” to fight the Islamic State in Iraq and Syria and blasted President Barack Obama as not having “done a damn thing” to quell the terrorist insurgency.

The remarks follow news that Shiite terrorist group Hezbollah is planning to increase its presence in Iraq to combat ISIS.

Soleiman, who heads Iran’s Quds Force tasked with special operations, was quoted by Iran’s Tasnim news agency as stating that “nobody is present” in the war on the Islamic State, aside from the government of Iran, and that the United States is particularly guilty of negligence in the war.

“Obama has not done a damn thing so far to confront Daesh: doesn’t that show that there is no will in America to confront it?” Soleimani reportedly said, echoing remarks American Secretary of Defense Ashton Carter made on Sunday that it was the Iraqi military that had shown they lack the “will to fight” against the Islamic State.

“How is it that America claims to be protecting the Iraqi government, when a few kilometres away in Ramadi killings and war crimes are taking place and they are doing nothing?” Soleimani asked.

His criticism of the Obama administration echoes that of many within the United States who would like to see a more prominent role for the United States in the struggle, as well as the containment of an increasingly militarily belligerent Iran. “How is it that ISIS is seizing territory on two fronts, 10 months after US airstrikes began?” asked House Foreign Affairs Chairman Rep. Ed Royce (R-CA) 65%
last week, decrying the passive role the Obama administration had taken against the Islamic State.

“It’s dreadfully obvious that we aren’t working well enough to defeat ISIS and protect the people of Palmyra and its precious relics of our shared history,” he added. Palmyra and Ramadi, Iraq, both fell last week to the terrorists, and mass murders have been reported of both civilians and military personnel in both.

In an interview with The Atlantic‘s Jeffrey Goldberg last week, President Obama stated that America was winning the war on the Islamic State. “Ramadi had been vulnerable for a very long time, primarily because these are not Iraqi security forces that we have trained or reinforced,” the President stated, asserting, “No, I don’t think we’re losing.” The interview was printed shortly before news arrived in the West of the fall of Palmyra.

President Obama’s statements appeared to be more in line with what the Iraqi government had been expecting of American officials than Carter’s. “Carter was likely given incorrect information because the situation on ground is different,” said Iraqi government spokesman Saad al-Hadithi of his “will to fight” remark.

The Iranian presence in Iraq has grown significantly to combat the Islamic State in the past few months, both officially and unofficially. Iran is currently embroiled in a battle to keep ISIS from fully controlling Baiji, an oil center in Iraq. As early as March, the militia group Hezbollah agreed to send 800 fighters to Iraq to fight ISIS and work alongside Iranian forces. The move, some lawmakers have suggested, was intended to prevent a situation in which American ground troops became necessary and overshadowed Iran’s presence.

In a speech from Lebanon this week, Hezbollah chief Hassan Nasrallah promised yet another increase in the number of Hezbollah fighters in Iraq, calling for a united international response against ISIS. “Today we are facing a kind of danger that is unprecedented in history, which targets humanity itself,” he said, calling for no one to “bury their heads in the sand.”

“We are present today in many places and we will be present in all the places in Syria that this battle requires,” Nasrallah promised.

Haider al-Abadi Is The Current Iraq PM Who Was Past Advisor For Nouri Maliki ~ Haider al-Abadi Who Is A Shiite Spent 20 Years In U.K. Under British Training.

The [NWO] Islamic State [ISIS] itself appears to see Iran as a bigger threat than Sunni anti-ISIS citizens. [Iraq has been dominated by radical Shiite Politicians backed by U.S. British NWO in a Sunni Dominate country]. In an article in the latest issue of its [NWO ISIS orchestrated] official magazine, Dabiq, an Islamic State writer posits that ISIS will win because the coalition against it is too busy fighting amongst themselves, rather than fighting ISIS. Particularly, the article notes that the “apostate triad” of Turkey [true], Saudi Arabia [false], and Qatar [false] are working harder to appease the United States  than maintain control of the region, and that they are losing ground to Iran: 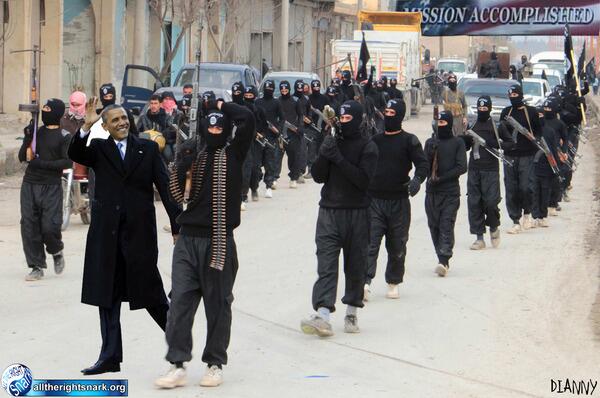 Obama & The NWO Black Flag Of Jihad. Here He Is With The NWO Muslim Brotherhood Monikered ISIS.

The Complete History of Israeli Intelligence. The book focused on the five branches of the Israeli intelligence community and the role of each branch.

It also speculates on the future roles of the intelligence community in a potentially explosive area with the possibility of chemical, biological, and nuclear warfare. The acronym ISIS Is Defined By The Prime Minister Of Israel In 1990.

It is one of the main entities in the Israeli Intelligence Community, along with Aman (military intelligence) and Shin Bet (internal security).

The Mossad is responsible for intelligence collection, covert operations, and counterterrorism, as well as bringing Jews to Israel from countries where official Aliyah agencies are forbidden, and protecting Jewish communities. Its director reports directly to the Prime Minister.

Leading Muslims Have Stated That ISIS “Is neither Islamic, nor is it a State. The group has no standing with faithful Muslims, nor among the international community of nations” the letter was signed by the Islamic Society of Britain and the Association of Muslim Lawyers. The Independent

From ISIS To ISIL To IS…Oh, My!

ISIS is put into play in the Middle East via

TEHRAN – Iraqi Special Forces said they have arrested several ISIL’s foreign military advisors, including American, Israeli and Arab nationals in an operation in Mosul in the Northern parts of the country.

The Iraqi forces said they have retrieved four foreign passports, including those that belonged to American and Israeli nationals and one that belonged to the national of a Persian Gulf Cooperation Council (PGCC) member-state, from ISIL’s [ISIS] military advisors.

The foreign advisors were arrested in a military operation in Tal Abta desert near Mosul city.

Alexander Prokhanov said that Mossad is also likely to have transferred some of its spying experiences to the ISIL [ISIS] leadership, adding that Israel’s military advisors could be assisting the Takfiri terrorists.

Prokhanov said ISIL is a byproduct of US policies in the Middle East.

ISIL is a tool at the hands of the United States. They tell the Europeans that if we (the Americans) do not intervene, ISIL will cause you harm,” he said, adding that Iran and Russia are the prime targets of the ISIL.

“They launched their first terror attack against us just a few days back in Chechnya,” he said, stressing that the ISIL ideology has got nothing to do with the Islam practiced in Iran and some other Muslim countries in the Middle East region.

Prokhanov said the United States and Israel are one and the same when it comes to supporting a terror organization like the ISIL.

Muslim Brotherhood Are Not Real Muslims

ROTHSCHILD’S MEDIA: TO CONTROL INFORMATION, TO ASSURE NWO PROPAGANDA, TO BE BOTH DOMINANT AND UBIQUITOUS.

← Implosion Rule By Corporations: TPP Partnership Immune To The Laws Of Sovereign Countries.
Jade Helm: Hey Military Joe Where You Going With That Gun In Your Hand ~ To Shoot Lady Liberty? →