BAGHDAD (AP) — Prominent Shiite leaders pushed Thursday for the removal of Iraqi Prime Minister Nouri al-Maliki [who is also of the Shiite minority] as parliament prepared to start work next week on putting together a new government, under intense U.S. pressure to rapidly form a united front against an unrelenting CIA orchestrated ISIS insurgent {False Flag] onslaught.

Increasingly, the Shiite minority’s al-Maliki’s former allies believe he cannot lead an inclusive government that can draw [majority] Sunnis away from support of the fighters who have swept over a large swath of Iraq as they head toward the capital, Baghdad. [Sunnis are not in support of ISIS ~ they know it is a USA/NWO covert op.]

The real Sunnis Militia are hold up in Kurdistan who are fighting the Obama/Maliki genocide of the majority Sunnis. ISIS is a moniker of the CIA orchestrated covert op that is trying to appear as Sunnis, IOWs to overshadow the REAL Sunni Militia in the media who are in in Kurdistan ~ to make it appear as though Sunnis themselves are destroying their own country and that retaliation should be taken against the Sunnis. The Sunni Militia can easily take out the covert op ISIS.

ISIS is another name for Muslim Brotherhood or Rothschild Middle East Henchmen who are there to over throw governments and to collectivize all financial operations into the NWO aka; BOE ~ Bank Of England.

What Is Sharia Law?

In a further sign of Iraq’s unraveling along sectarian lines, a bombing on Thursday killed 12 people in a Shiite neighborhood of Baghdad that houses a revered shrine, and police found the bullet-riddled bodies of eight Sunnis south of the capital. Israeli Mossad Snipers Killing U.S. Troops in Iraq (Creating Chaos): U.S. Marine Throws Medals To The Floor!

Most crucially, though, backing for al-Maliki is weakening with his most important ally, neighboring Iran. [Iran has no interest in Maliki ~ they too realize this is all Obama]

A senior Iranian general who met with Shiite politicians in Iraq during a 10-day visit this month returned home with a list of potential prime minister candidates for Iran’s leadership to consider, several senior Iraqi Shiite politicians who have knowledge of the general’s meetings told The Associated Press. [Pure Garbage] 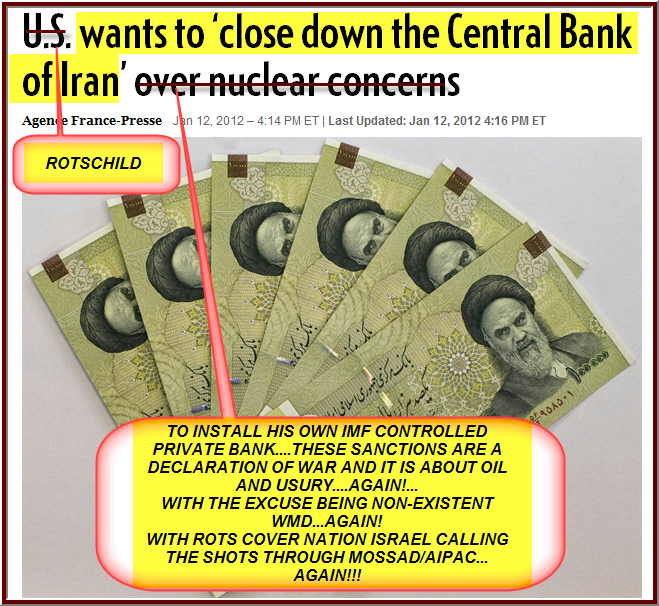 Iran’s supreme leader, Ayatollah Ali Khamenei, wants al-Maliki to remain in his post, at least for now, the politicians said, but Iran’s moderate president, Hassan Rouhani, believes al-Maliki must go or else Iraq will fragment. Khamenei holds final say in all state matters in Iran, but the politicians expressed doubt he would insist on al-Maliki against overwhelming rejection of him by Iraq’s Shiite parties.

The general, Ghasem Soleimani, is expected to return within days to inform Iraqi politicians of Tehran’s favorite, they said, speaking on condition of anonymity to discuss the internal deliberations.[Pure Garbage]

Iran’s Shiite cleric-led government succeeded in herding reluctant Shiite parties into backing al-Maliki for a second term four years ago, and its leverage over Iraq’s Shiite political establishment has grown significantly since the 2011 withdrawal of U.S. troops after an eight-year presence. [Pure Garbage]

al-Maliki was in Iraq to induce political attrition, to decrease the majority of Sunnis for Shiite so as to establish Sharia Financial Laws for the NWO.

Non-Arab and mostly Shiite, Iran has found in majority Shiite Iraq a convenient vehicle to extend its sphere of regional influence to the heart of the Middle East. Iran’s leverage in Iraq also gives it a trump card against its Sunni rivals in the Gulf region, where powerhouse Saudi Arabia, for example, has traditionally viewed Tehran with suspicion.

The United States and its allies are pushing [pure garbage] [U.S. and their allies are pushing ISIS in order to create a State of Emergency which would have given Maliki an excuse to stay in power longer] for the creation of a government that can draw support among Iraq’s Sunni majority, which has been alienated by al-Maliki, seen as a fiercely partisan Shiite. [The U.S. put Maliki in charge of Iraq [fraud elections] [The Sunni majority would have never elected this piece of shit] just like they did Mohammed Morsi of Egypt who now sits in prison]

British Foreign Secretary William Hague, meeting with al-Maliki in Baghdad on Thursday, told a news conference that “we believe the urgent priority must be to form an inclusive government … that can command the support of all Iraqis and work to stop terrorists and their terrible crimes.” [Only terrorists there are the NWO covert op terrorists]

Hague’s trip follows a visit by U.S Secretary of State John Kerry, who earlier this week delivered a similar message.

Kerry met in Paris on Thursday with foreign ministers from America’s top Sunni Arab allies to consider how to confront the [U.S. CIA] al-Qaida breakaway group leading the [NWO] insurgent offensive, the Islamic State of Iraq and the Levant. The threat “concerns every single country here,” Kerry told them at the start of the meeting, held at the U.S. ambassador’s residence.

China Warns Kerry: Sanctions Against Russia Will Bring “Retaliatory Action” Which This Time Kerry Will Loose!

The Arab diplomats did not commit to sending any military assistance to Baghdad, as the U.S. is doing. [False Flag Induced] The Pentagon said Thursday that four teams of Army special forces have arrived in Baghdad, bringing the number of American troops there to 90 out of the 300 promised by President Barack Obama. The Americans will advise and assist Iraqi counterterrorism forces. [advise & assist counterterrorism forces ~ who are they pray tell?] [Maliki had Iraq’s security forces stand down to the small pockets of ISIS ~ Its all a ruse]

The Obama administration hopes that Iraq’s Sunni [False they are Muslim Brotherhood] neighbors — notably Jordan and Saudi Arabia — will use their cross-border tribal networks to bolster the Sunni militias [False ~ bolster ISIS] helping to fight the Islamic State [False ~ Sunni majority to establish Shiite Sharia Financial Laws]. However, while they feel threatened by the Islamic State [They are the Islamic State aka; ISIS aka; Obama covert op], those Sunni countries are also bitterly opposed to al-Maliki [True ~ because he is an NWO puppet], saying his Shiite-dominated rule has marginalized Iraq’s Sunnis. [True]

So far, al-Maliki has defied calls to step aside. In April elections, his State of the Law bloc won the largest proportion in parliament — 92 seats in the 328-member chamber — but that is not enough for the simple majority needed to name him prime minister.

He no longer has the support of his former Shiite, Kurdish and Sunni allies in his previous coalition.

“We need a government of national consensus. Now, who do you think will not be able to achieve consensus?” said Baleigh Abu Qolal, spokesman for a major Shiite party, the Iranian-backed Supreme Islamic Iraqi Council. [Pure hogwash ~ Iran has nothing to do with this]

Compounding the pressure on al-Maliki, a prominent Shiite cleric, Muqtada al-Sadr, called in a televised statement late Wednesday for a national unity government of “new faces” representing all groups.

Al-Sadr, whose followers fought fiercely against both U.S. forces and Sunni extremists [No such thing][Sunnis are the majority population of Iraq who are being systematically wiped out by Obama & Maliki] during the height of the war nearly a decade ago, also vowed to “shake the ground” under the feet of the Sunni insurgents [again this is NWO insurgents has nothing to do with Sunnis], who have threatened to advance toward Baghdad and holy Shiite cities in the south. [pure propaganda] [This is insurgency is the NWO covert op attempting to establish Shiite Sharia Law ~ by marginalizing/murdering Sunnis].

Also, Iraq’s most revered and influential Shiite cleric, Grand Ayatollah Ali al-Sistani, appealed to al-Maliki through an intermediary to step aside because he fears al-Maliki is driving Iraq into fragmentation, according to a senior member of a prominent Shiite family that has for decades maintained regular contact with al-Sistani.

“Al-Sistani is in his 80s and if there is one thing he does not want to see in his lifetime, it is an Iraq breaking up into Sunni, Shiite and Kurdish enclaves,” the senior family member told the AP.

Al-Sistani, believed to be 86, lives in the Shiite holy city of Najaf, south of Baghdad, where he rarely ventures out of his modest house. But his voice is powerful: His call to arms last week prompted tens of thousands of Shiites to volunteer to fight against the Sunni militants.

Notably, Soleimani, the Iranian general, met for two hours with al-Sistani’s powerful son, Mohammed Reda, in Najaf, the Shiite politicians said. [pure NWO propaganda ~ NWO brought ISIS out of Syria to foment a national state of emergency in Iraq to allow Maliki the possibility of staying in office~ it failed miserably.] [Now the NWO is loading the media with back tracking propaganda and trying to blame all this as an Iranian. Syria type of collusion ~ even going so far as to now release ‘leaked’ info the Syria & Iran are hoarding gold] [Of course this is what Rothschild’s NWO is doing with Libya Gold, Ukrainian Gold etc etc. ~ these are evil lying murderous sociopaths running amuck in our world treating humans as if they are cattle in their game to hoard the world’s wealth]

The list of potential candidates that Soleimani is carrying includes Adel Abdul-Mahdi, a French-educated economist who has served as vice president; Bayan Jabr, a former finance and interior minister under al-Maliki; and former prime minister Ibrahim al-Jaafari, the politicians said. But al-Maliki may insist that, if he goes, another figure from his State of the Law bloc get the post, giving him a continuing influence, they said. [again all this a very sophomoric ruse, this is all NWO not Iran] 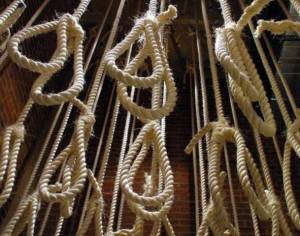 The United States is pressing for parliament to act quickly on forming the new government, [Bull ~ U.S. NWO knows they lost and are simply throwing their Maliki under the bus] a process that took nine months in 2010. “Our concern will increase with every passing day” that the timetable is not met, a senior State Department official said, speaking on condition of anonymity because of the sensitivity of discussions over the Iraqi political process. [They lost in Egypt, Ukraine, & now Iraq] [The Sunnis are the majority in Iraq and this is why Maliki is toast, this is why NWO sent down ISIS to give Maliki another chance through a declaration of national emergency…this failed too]

Iraq’s vice president called on the new parliament to convene Tuesday, when, under the constitution, its first step will be to elect a speaker. It then has 30 days to elect a new president, replacing ailing Kurdish politician Jalal Talabani, who has held the post for two terms and is ineligible for another. The president’s job will likely go to Kurdish politician Barham Saleh, a former deputy prime minister.

The president will have 15 days to mandate the head of parliament’s largest bloc to form a new government. That prime minister-designate will then have 30 days to put together a coalition.

“We will remain here together in Kirkuk,” Barzani declared during a tour of the city, which the Kurds have long sought to incorporate into their self-rule region.

The frequent discovery in recent weeks of bullet-riddled bodies dumped on the streets has raised the specter of a return of sectarian warfare. [fomented chaos by Obama]

On Thursday, authorities found eight men believed to be Sunnis in their 30s and 40s who had been shot to death in Mahmoudiya, a volatile town about 20 miles (30 kilometers) south of Bagdad, police and hospital officials said.

Then, shortly before sunset, a bomb exploded near a clothing shop in Baghdad’s northern Shiite neighborhood of Kazimiyah, killing 12 people and wounding 32, authorities said.